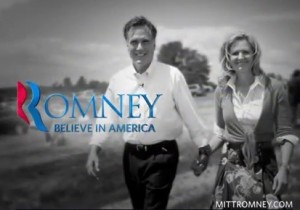 Former Massachusetts Gov. Mitt Romney has had tongues wagging in the political media for the past couple of days, based on what has to be the weirdest attack ad ever. The ad is weird because it doesn’t contain a single mention of any of his opponents, or anything at all, other than Mitt Romney. It portrays the GOP presidential hopeful as a steady family man, and a loyal company man, but an adviser for Newt Gingrich knows what’s really going on, telling ABC News that the ad “is basically Romney saying ‘My family is better than your family.’ It’s going to backfire.”

Lost in all the hoopla surrounding the ad is how deeply it cuts, not at Newt Gingrich, but at Mitt Romney.

RELATED: Mitt Romney Wants You To Know He’s Been Married To The Same Woman For 42 Years In New Ad

As the Republican primary race heats up, there have been a number of brutal ads that have generated buzz among the political news media, but this gauzy chunk of happy-talk from Mitt Romney has gotten the sort of reaction you’d expect from a snuff film:

The reaction to Romney’s ad would be comical if it wasn’t so dead-on. ABC News’ Jake Tapper reports on the ad’s glaring subtext, and the reaction from the Gingrich campaign:

To some observers, Mitt Romney’s new ad, aimed at Iowa Republicans, seems to be saying, “Yes, I’m Mormon. But at least I’m not a philanderer. Like Newt.”

As such, it carries considerable risks. Not only by reminding conservative evangelicals that he belongs to a religion many do not approve of, but also by taking on Gingrich – subtly, perhaps, but unmistakably -on his three marriages and past person indiscretions.

One Gingrich adviser told ABC News that the ad “is basically Romney saying ‘My family is better than your family.’ It’s going to backfire.”

Tapper goes on to point out that the ad could resonate with conservatives in Iowa, where the ad is running in advance of that state’s first-in-the-nation caucus. As many pundits have pointed out, though, Newt Gingrich’s personal history is very much a known quantity with Republican voters, and it hasn’t prevented him from vaulting to a hefty lead in the polls.

What’s really fascinating about this ad is how it cuts so deeply at both candidates without ever showing the blade. In Gingrich’s case, the mere mention of a faithful marriage is such an unmistakable jab that a senior campaign adviser feels the need to respond (with divorce statistics, to boot). That it seems not to matter to voters demonstrates their desperation to send out a bomb-thrower against President Obama, and belies the sincerity of their devotion to “family values.”

Romney’s ad also cuts against Mitt Romney, whose claims of “steadiness” and “constancy” may resonate next to Gingrich’s three marriages and history of adultery, but sound like punchlines next to Mitt Romney’s Kama Sutra‘s worth of positions on pretty much any issue you can name. In a bit of glaring journalistic malpractice, the press has been so fascinated with the ad’s anti-Gingrich subtext that they’ve completely ignored where that ad’s narration came from.

At Nov. 9’s CNBC Republican debate, moderator John Harwood called Romney out on the fact that he changes positions like a krump dancer with ADD, and asked him “What can you say to Republicans to persuade them that things you say in the campaign are rooted in something deeper than the fact you are running for office?”

Romney’s response was a complete non-sequitur that served only to reinforce the fact that he has no effective response to the charge:

It’s really a shame for Romney, because as Ron Paul‘s wood-chipper of an attack ad illustrates, chief rival Newt Gingrich is also vulnerable on this count. While his “attack” on Gingrich’s family life may not have much of an effect, it’s a stroke of luck for him that the media was too distracted by it to notice that Mitt Romney was also exposing his own most glaring weakness.