Marco Rubio: I’m No ‘Fancy Pants,’ I Married a Cheerleader and Buy Lots of Guns

Marco Rubio: I’m No ‘Fancy Pants,’ I Married a Cheerleader and Buy Lots of Guns 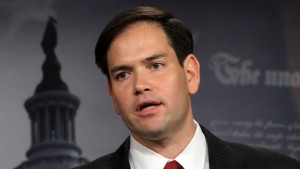 In what might be the most excellent New York Times profile of a public figure of all time, Marco Rubio and reporters Jeremy W. Peters and Michael Barbaro make the case for Rubio’s indomitable masculinity. Apparently, Rubio and his handlers thought that all the attention heaped on the candidate’s shoes a few weeks ago was just a little too feminine for a presidential campaign. After all, only women wear shoes and only men can be president. Something had to be done!

That something turned out to be an assertion of each of the ways that Rubio is stereotypically and unapologetically A Man. In the article titled, “Boots? Marco Rubio Wants to Talk About Guns and Football,” the authors point out that he went to a gun store on Christmas Eve because “he was just itching to buy one.” Manly!

They go on to say that not only does Rubio love football, but he married a cheerleader! Extra manly! (Her name is Jeanette Dousdebes Rubio and she seems down-to-earth and caring.)

The profilers segue straight from pointing out that Rubio married a professional hot woman to talking about how hard he would be on suspected terrorists if elected president. They describe him as “radiating machismo” when he scoffed at how President Barack Obama has handled terrorist threats by decreeing, “This is not a real war on terror. This is a joke.” They share that his dream picks for cabinet positions would be “top-flight talent from the New England Patriots.”

If it weren’t for his wife — you know, the one who was once paid to be attractive and then went on to marry a manly man — he might not need to be making such a big show of his masculinity: she gave him those boots that got so much attention as a Christmas gift. Now, he is doubling down on proving that, and I quote, he’s no “pointy-toed-boot-wearing fancy-pants,” but rather, a “heat-packing, waterboarding, football-tossing Florida senator.”

Peters and Barbaro elaborate on the long history of presidential candidates pandering to voters by embodying traditionally masculine personality traits, listing John Kerry, Mitt Romney, and even Sarah Palin among those who have attempted to curry favor by ramping up the ol’ hunting talk or being conspicuously photographed playing sports. The result is a well-researched and nuanced piece that stands in stark contrast to the “pumped-up guy talk” that Rubio is espousing in the wake of the boots scandal.

Unfortunately for our man, no plan is foolproof. Some voters who have heard his revamped speeches don’t like what he’s saying. Army veteran John Lubecky had been interested in Rubio as a candidate until he attended one of the new, improved, manly speeches.

“Did you hear him say he wanted to torture people?” he asked. “You’ve got Cruz saying he’s going to carpet bomb the Middle East, Rubio saying he’d torture people, and Trump who wants to nuke everybody.”

The good news is that the famous boots have sold out online, so if Rubio ever decides to let his macho-macho man guard down, he has a future as a fashion icon.