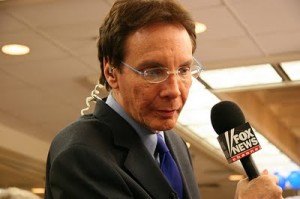 By virtue of being Alan Colmes, you know that Alan Colmes has to be a bit of a masochist. For more than twelve years, he endured the unenviable ‘liberal whipping boy’ slot on Hannity & Colmes — and, by extension, on all of Fox.

Even as he’s moved on to host a liberal radio show on Fox Radio, that impulse hasn’t left him. He’s collected and posted lots of his hate mail on his blog before — and now, hate tweets.

Apparently, some of his readers were unhappy that Colmes used that loaded word “teabagger” in two of his blog posts about the 9/12 protests. Even Newsbusters (rather needlessly) piled on. When the hate tweets started flowing, Colmes dutifully collected them for all the world to see.

Most amusing is the name-calling from those who accuse me of name-calling.  And then there are the conservatives for whom I used to be their favorite pet liberal until this one egregious offense, after which I am now pond scum; to which I say your love for me couldn’t have been to solid to begin with.

Herewith, Some of the Hate Tweets:

KCHunt@AlanColmes I was a fan of both you and Hannity. But now that u have reduced urself 2 calling us names. U R just a sad little man now. 2 bad

Update: As eagle-eyed Mediaite correspondent Tommy Christopher points out, this one got Colmes in hot air water; at first, he wrongly attributed the tweet to Hot Air editor allahpundit from his own account, upticking his hate tweet ratio considerably.

NYNewsJunkie@alancolmes is a damn ghoul, just an observation, no matter how great his sis in law is, he’s a fucking creep.

There are a bunch more at the original blog post here. Keep in mind that this is stuff that Colmes sifted through and compiled, on his blog, with only a paragraph of explanation at the start. A good chunk of his comment section then went on to agree with the hate Tweeters. Being Alan Colmes must be an endless feat of endurance, but he seems up to the task.

As is so often the case, the Colbert Report is spot-on about the Hannity-Colmes dynamic of yore. Colmes himself even came into participate in this skit, in which he sits on a tiny stool and ultimately gets fired for disagreeing with Stephen Colbert too vigorously: