McCain: I Chose Palin Because She Was The Better Candidate, Not Because Of Romney’s Tax Returns

McCain: I Chose Palin Because She Was The Better Candidate, Not Because Of Romney’s Tax Returns 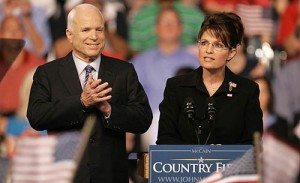 A strong Democratic talking point for the past few days has been a mini-flashback to 2008, namely that John McCain saw 27 years of Mitt Romney’s tax returns and decided Sarah Palin was a preferable choice. McCain finally responded today in an exclusive interview with POLITICO, insisting that Palin was the better candidate, but it had nothing to do with Romney’s returns, and dismissed such speculation as “stupid.”

POLITICO reports that McCain “grew angry” with the claim, and explained that nothing in Romney’s tax returns made his campaign decide Palin would be a safer choice.

The charge has been repeated by Chicago mayor Rahm Emanuel, CNN contributor James Carville, and Maryland governor Martin O’Malley. McCain said that Romney was looked over and ruled out as other candidates like Tim Pawlenty were, and his campaign concluded Palin was the best choice for the ticket. He dismissed the speculation as “stupid questions.”

For what it’s worth, McCain 2008 strategist Steve Schmidt also denied that the tax returns were a problem for the campaign, and there is certainly no love lost between Schmidt and Palin. However, Schmidt did admit they considered Romney’s wealth a problem.

“Sen. McCain got caught flat-footed answering a question about how many houses he owned… In fact, they were Cindy McCain’s properties but that distinction was lost in the political optics and we knew it would be a big liability that the presidential and the vice presidential candidates together owned more than a dozen homes. It was like something out of a ‘Saturday Night Live’ skit. I mean, come on.”

McCain has publicly maintained a good relationship with Palin, and joked in April that Palin would make a good VP nominee for Romney.