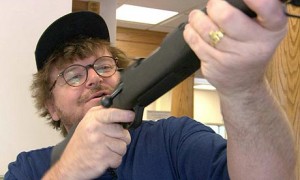 Opposition to President Obama’s Libya policy is starting to look more and more like a blindfolded firing squad that just fell off a merry-go-round, as liberal firebreather Michael Moore has joined a disparate gaggle of Obama critics that also includes Newt Gingrich, Rudy Giuliani, Dennis Kucinich, and Sen. Dick Lugar. Moore, in a series of tweets more scattershot than a meth addict with a sawed-off Mossberg, hit Obama with everything, including several varieties of kitchen sink.

It’s only cause we’re defending the Libyan people from a tyrant! That’s why we bombed the Saudis last wk! Hahaha. Pentagon=comedy

Later on, though, he didn’t seem to so much disagree with the action, so much as wished it had been done sooner?

Too little, too late. So NOW we try 2 help the Libyans after Khaddafy has retaken most of country? Really just a big show, isn’t it?

He also took a shot at supporters of military action who suddenly like French diplomacy again:

And we always follow the French’s lead! Next thing you know, we’ll have free health care & free college! Yay war!

But then, Moore channeled the entire staff of Big Journalism, winging Obama’s Nobel Prize win, and zinging the President over his trip to Brazil:

May I suggest a 50-mile evacuation zone around Obama’s Nobel Peace Prize? #returnspolicy

Who starts a war in Africa then heads off to South America? Is that weird, or is he just loaded with that much cool?

& what better day 2 start a war than the same day we bombed Baghdad &began the IraqWar, 8yrs ago 2day. Don’t ever say we’re not sentimental!

Finally, Moore seems to think that every Middle Eastern revolution is exactly the same, and that US foreign policy is, by rule, be forever set in stone:

Our job is 2 prop up Arab dictators (Saudi, Yemen, Bahrain, Kuwait, Jordan, etc), not overthrow them & everyone in Arab world knows it

So knock off “it’s our moral obligation 2 defend ppl of Libya.” After Iraq & Afghan & support of dictators, we have no moral standing.

The situation in Libya, and the larger crises unfolding in the Middle East, are complex, and ought to be the subject of vigorous debate, but it’s usually liberals like Michael Moore who argue for a nuanced understanding of these issues, rather than simplistic, knee-jerk reactions like this. Moore’s tirade proves nothing more than that he is no more deserving of a seat at the grown-ups table than the bumper-sticker lunkheads against whom he normally rails.