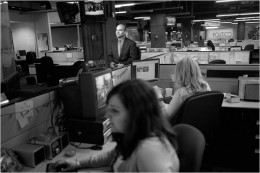 I don’t know if this qualifies as a conflict of interest so meta it cancels itself out, or just the height of self-branding, but in his “most powerful” Playbook column this morning ‘the man the White House wakes up to’ Politico’s Mike Allen scooped the New York Times by releasing nuggets from a feature they are doing on…Mike Allen in this weekend’s Magazine. Yes. Here’s what ran in Playbook:

FIRST LOOK — “BLACKBERRY BREAKFAST” — N.Y. Times national political reporter Mark Leibovich’s 8,100-word cover story of Sunday’s New York Times Magazine, “THE MAN THE WHITE HOUSE WAKES UP TO: Mike Allen and the Politico-ization of Washington … The Insider’s Insider”: “Playbook has become the principal early-morning document for an elite set of political and news-media thrivers and strivers. … [M]any in Washington … [describe] Allen with some variation on ‘the most powerful’ or ‘important’ journalist in the capital. … Allen’s ‘data points’ … have become the cheat sheet of record for a time-starved city in which the power-and-information hierarchy has been upended. … ‘He is part mascot and part sleepless narrator of our town,’ Tracy Sefl … told me by e-mail. … ‘Washington narratives and impressions are no longer shaped by the grand pronouncements of big news organizations,’ said Allen … ‘The smartest people in politics give us the kindling, and we light the fire.’ … … Playbook has become the political-media equivalent of those food pills that futurists envision will replace meals. … [T]he Playbook community … includes a former president, two former vice presidents, C.E.O.’s and network anchors … If … Axelrod can’t read the papers before rushing off to the White House, he will scroll through Playbook during his six-block ride to work … [Leibo:] I read Playbook every morning on my BlackBerry, usually while my copies of The New York Times and The Washington Post are in plastic bags. … [John] Harris readily acknowledges that Politico is ‘not for everybody,’ and [Jim] VandeHei said they have begun focusing their recruiting on New York, because ‘the city produces reporters who are fearless, fast and ruthlessly competitive.’”

The story, by Mark Leibovitch, just went live on the Internet and one suspects the less flattering aspects of it may not have made it to Playbook this am [update: nope, nothing terrible]. Allen, who does wield enormous power in Washington, has drawn fire in the past for sometimes being little more than a mouthpiece to pols (and/or Dick Cheney) who want to get their arguments out there without having to answer any questions. Will update once I have read.

UPDATE: From the piece: