This Exists: The House Of Representatives GOP New Media Challenge! 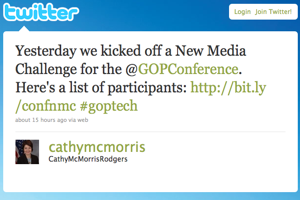 In an attempt to get in on all that social networking has to offer, House Republicans are staging their first Congressional New Media Challenge, a competition modeled after NCAA March Madness in which representatives vie for the largest number of Twitter, Facebook, and YouTube followers. Round one, on Twitter, begins today. Time to fire up the Congressional Blackberries!

The competition is in anticipation of the fall midterm elections, forcing representatives to become more active online and engage more directly with constituents. The brainchild of Congresswoman Cathy McMorris Rodgers (R-WA), vice chair of the group, the idea is to get representatives preemptively campaigning by making an effort to engage with new media, and while they’re at it get voters excited about their representatives through interacting online. Unfortunately, not all House Republicans are participating– noticeably absent is web-friendly Texas Congressman Ron Paul— but here’s the list of competitors on Twitter, and our top five picks to take the title (and an as-yet-determined prize):

The competition is anyone’s game, but depending on what voters are counting as the most important factor, each of these five has as good as chance as any. If being the most far-right counts, Chaffetz and Neugebauer have the advantage. If it’s who can garner the most attention nationwide, Bachmann wins in a landslide. But because this is the internet and sex sells, we’re betting on Reps. Ros-Lehtinen (which you can watch, via The Colbert Report, perform a striptease here) and Schock, for his TMZ portfolio, to take the prize. After Friday, though, competitors will be in brackets, so predicting the winners will be at least in part determined by the proximity to difficult competition.