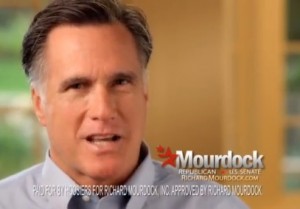 President Obama‘s reelection team is making a concerted effort to tie Republican presidential candidate Mitt Romney to Indiana U.S. Senate candidate Richard Mourdock, who said, in a debate, that pregnancies resulting from rape are something that “God intended to happen.”

They needn’t bother. Although the former Massachusetts Governor endorsed Mourdock, he enjoys a closer connection to someone with an even colder, uglier attitude toward rape pregnancies: vice-presidential nominee Paul Ryan.

Obama for America and progressive superPAC American Bridge have each sent several memos to reporters today tying Mitt Romney to Richard Mourdock, who explained his opposition to abortion, even in cases of rape, this way:

“I’ve struggled with it myself for a long time, but I came to realize that life is that gift from God. And even when life begins in that horrible situation of rape, that it is something that God intended to happen.”

I guess nobody told Mourdock that even God is fine with killing the unborn, as long as you kill the mother, too.

Mourdock’s comment is just the latest in a series of well-publicized incidents involving Republican attitudes toward abortion and rape, recalling the Todd Akin “legitimate rape” (what’s more legitimate than a blessing from God?) theory, which in turn highlighted Rep. Paul Ryan’s (R-WI) attempts to enshrine “forcible rape” into federal law. More recently, Ryan was forced to pull his endorsement (via a spokesman) of State Rep. Roger Rivard (R-WI 75th), who told a newspaper that “some girls, they rape so easy.”

Again through a spokesperson, the Romney campaign has said that the candidate “disagrees with Richard Mourdock’s comments and they do not reflect his views,” but they haven’t withdrawn this recent endorsement of Mourdock, in which Gov. Romney says “This fall, I’m supporting Richard Mourdock for Senate. As State Treasurer, Richard worked with Governor Daniels to balance the budget, and make government more accountable. As Senator, Richard will be the 51st vote to repeal and replace government-run healthcare. Richard will help stop the liberal Reid-Pelosi agenda. With so much at stake, I hope you’ll join me in supporting Richard Mourdock for U.S. Senate.”

Whether he rescinds that endorsement or not, however, Mitt Romney already has a guy on his ticket who holds the same position on rape and abortion, but for an even less palatable reason than Mourdock, if that’s possible.

Richard Mourdock is, apparently, subscribing to the “mysterious ways” belief that since God is all-powerful, nothing can happen that isn’t His will (which would include abortions, but nevermind), to some degree, and that perhaps, out of tragedy, blessings can arise. Even among religious folks, there is disagreement as to the role that free will plays against fate and destiny, and I don’t think this belief is more or less worthy of mockery than any other. There are obviously women who have been raped who believe this, and decide to carry out such pregnancies. They are as deserving of respect as those who make a different choice.

But that’s the key distinction: choice. Richard Mourdock says he “struggled” with this issue, but he really has not, and never will. He’s never struggled to keep a rapist from violating his body and impregnating him, nor will he ever wrestle with the decision to end a pregnancy, yet he and Paul Ryan seek to remove that choice from the people who will.

Paul Ryan will be President Ryan if Mitt Romney is elected, and becomes unable to serve. Ryan has made it clear that the only thing standing between him and banning abortion with no exception for rape is Mitt Romney. At the vice-presidential debate, Vice President Biden summed up Ryan’s position this way: “Now with regard to the way in which the — we differ, my friend says that he — well I guess he accepts Governor Romney’s position now, because in the past he has argued that there was — there’s rape and forcible rape. He’s argued that in the case of rape or incest, it was still — it would be a crime to engage in having an abortion.”

Ryan didn’t dispute any of this. His response was “All I’m saying is, if you believe that life begins at conception, that, therefore, doesn’t change the definition of life. That’s a principle. The policy of a Romney administration is to oppose abortion with exceptions for rape, incest and life of the mother.”

Got that? No Romney, no rape exception, and President Ryan will have the Congress to make that happen. In an August interview, Ryan explained that this wasn’t because of the will of God, but because rape is just another method of conception:

Ryan’s position is based on “logic” and the “science” that says life begins at conception. God has nothing to do with it.

Lest any voter be confused into thinking that Mitt Romney is the reasonable one, however, it is important to note that he has repeatedly gone on the record supporting measures that would ban all abortions and most contraception, without any exceptions, only to later claim that he does support the exceptions. It can be difficult to figure out what the real Romney thinks, but in this case, he told us what’s behind his political calculation. The only reason he doesn’t ban all abortions, which he said he would be “delighted to do,” is that “that’s not where we are. That’s not where America is today.”

So Romney wants to ban all abortions, without exception, but recognizes that he can’t. In their hearts, Mitt Romney, Paul Ryan, Richard Mourdock, and Todd Akin are all on the same page. Only their words differ, and only slightly. Voters can decide for themselves whether or not they agree, but they need to know what they’re getting.