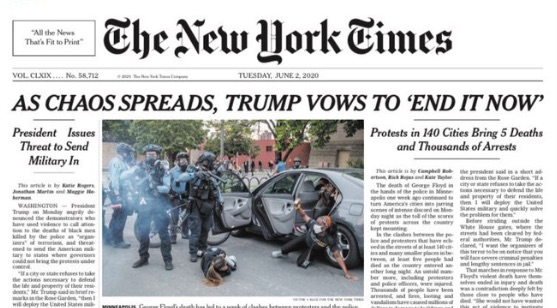 “As Chaos Spreads, Trump Vows to ‘End It Now'” the Times’ banner headline read, prompting many media watchers to fire back at its White House press release-like nature.

As Chaos Spreads, Trump Vows to “End It Now”#nytimes pic.twitter.com/D4vV55KKEY

The journalistically dubious headline evoked a similarly administration-friendly effort from last summer, when the Times put a grossly generous polish on a presidential speech in the wake of two mass shootings that targeted minorities: “Trump Urges Unity vs. Racism.” That headline, which the executive editor Dean Baquet later acknowledged was “bad,” was subsequently changed for later print editions into: “Assailing Hate But Not Guns.” Online, the Times ultimately went with a much more contextualized “Trump Condemns White Supremacy But Stops Short of Major Gun Controls.”

After such a vocal, overwhelming backlash to this latest Trump headline by the Times, a 2nd edition revision could be in the works on Tuesday as well.

Just pathetic. An insult to readers and everyone else. https://t.co/6MTwpSdZeS

If the New York Times thinks this accurately describes what happened today, I have no idea what country they’ve been living in – they should just let Trump write their headlines. https://t.co/zZn7H5cZiC

Saying that the Times has learned zero lessons in the year since the disgraceful “Trump Urges Unity vs Racism” front page would be unfair to the countless people and institutions that struggle to learn, but at least try. https://t.co/me5LtPfxkf

What the actual hell is the NYT thinking https://t.co/ItvPW1c0mV

So the fact that the president of the United States ordered that Americans assembled in a public park be tear gassed so that he could have a photo op — that doesn’t make the front page tomorrow? https://t.co/1VxkGSXQ6r

As I tell my students, beware of journalism that is accurate but not true. This is accurate yet profoundly not true. https://t.co/RIx7KxcYUb

This one will be taught in journalism schools. https://t.co/4EmX7WrF7R

They brutalized peaceful protesters for a photo op. https://t.co/oTfFoEUoAr

Damn this is bad. NYT headline parrots Trump’s propaganda and makes him look like a courageous strongman. This is worse than “both sides-ing” – this is Fox-like. https://t.co/8qvY4GZ7o1

The NYT headline-writers are giving Trump exactly what he wants tonight. https://t.co/3qJvJrtYMz

Journalists are being beaten and jailed, Trump threatened to murder US citizens, and this is how they frame it. https://t.co/Xw27p6KB0c

Guys. I respect the hell out of you. Do yourself a favor and clean this up for edition #2. https://t.co/kgQMQ7W6GF

Why stop there, how about “Big Dick Cool Man (Many Muscles) Vows To Kick Wimpy Butts of Spooky Bad Guys” https://t.co/UEyjMdd23X

They missed the story and did the country a huge disservice. Better headline: Trump Sends Troops Into American Cities…(Subhead) Peaceful Protestors Attacked to Make Way for Trump Photo Op https://t.co/WVTc4cwi9e

Holy fucking crap – the Times is pro-fascist. This is it, they’ve crossed over to full compliance with the regime. https://t.co/eBqU4tC4N4

that’s what you went with? this is unconscionable. https://t.co/5W35BkZcfO

Chaos is bad, ending it is good. In this headline, Trump is presented as a force for good. https://t.co/KgwslMv79i