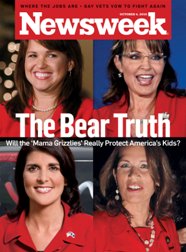 Before Newsweek goes into potential hibernation, they’ve put out a cover this week on Mama Grizzlies – the group led by Sarah Palin (as “led” as a group of rogue bears can be).

First of all, we should note how great the cover is – four “mama grizzlies” (Palin, Christine O’Donnell, Rep. Michele Bachmann and Nikki Haley) in power red suits (the inside title page is fantastic too). The content of the article? Well expect a Palin Facebook note in the near future.

So there’s your cover above – titled “The Bear Truth: Will the ‘Mama Grizzlies’ Really Protect America’s Kids,” by Lisa Miller.

The title page? To your right: 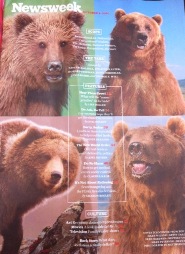 The article goes on to examine who the mama grizzlies are and where they came from, tracing the history of both the term and the candidates who now identify themselves using the omnivorous term. After the introductory paragraphs, Miller’s interpretation of the policy decisions won’t win her any mama grizzly fans:

With few exceptions, the grizzlies have been disinterested in the issues and policies that their political opponents say are good for children—despite new numbers from the census showing that rising numbers of America’s children are poor. Most of these candidates have vowed to fight to repeal President Obama’s health-care plan, for instance, and Bachmann and Haley have taken special aim at CHIP, a federal program aimed at helping low-income kids get health insurance.

She does note the somewhat non-children related policy decisions as well:

Most important, say the grizzlies—and on this they are generally in tune with conservatives—is the need for a serious dose of fiscal responsibility, managed by people with an old-fashioned sense of personal probity.

But ultimately, the conclusion is that the bears are mostly growl and no bite:

It’s mostly a marketing tool, meant to draw attention to Americans’ broad dissatisfaction with the way things are. Fair enough. Many people are dissatisfied, and they want to vent and they want to change Washington. But in the wild, real mama grizzlies are known to be aggressive, irrational, and mean. The issues facing the country are complex, and bears are not.

Conservatives, especially tea party-learning conservatives, will dub this another fading liberal newsweekly dismissing a threat to their view of the world. Liberals may see this as unnecessarily shining a light on a rising group that should instead be marginalized and ignored, at a time when many are in winnable elections.

But the piece is informative in many ways – to trace the term, and phenomenon, and lay out the sometimes lock-step, sometimes varied positions of the individual candidates. It’s an interesting story and one that is timely. And it doesn’t hurt to have that eye-catching cover.

The image associated with the story is great too. If it weren’t for the content of the article, these GOP candidates could use it in their campaign ads: 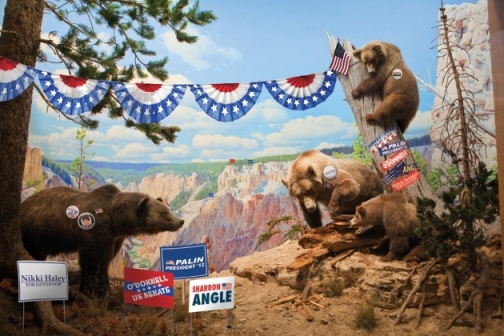