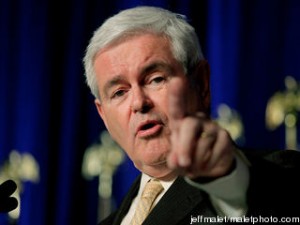 BALTIMORE, MD — Newt Gingrich fired up the crowd in this blue state with the promise that President Obama is so bad that he’s made it possible for the Republicans to win over the African American vote in 2012.

Gingrich stopped off at an airport Marriott near Baltimore Thursday to keynote the Maryland GOP’s annual Red, White & Blue banquet. Before the speech, he assured reporters that his campaign was still going strong. When he took the podium, he offered Republican donors a long, dense speech full of red meat and warnings about the state of the world around us.

He also said it was time for Republicans to tell African Americans how terrible Obama has been for them.

He broke out the “Obama is the food stamp president” line that got him in racial trouble earlier in the campaign.

But this time, he spun the line into a suggestion that the African American vote is ripe for the plucking.

Here’s how the line works: Obama is the food stamp president, Gingrich says, whereas he wants to be the paycheck president. The difference comes down to creating jobs or not, and Gingrich says he knows how to create them.

And that’s where the black vote comes in.

He explained that “in May, we had 41% unemployment among black teenagers in America.” That means if Republicans can put on a brave face, they might be able to turn the African American vote their way.

“The morning they believe that, you’re going to see margins in percents you never dreamed of decide there’s a better future,” Gingrich said. “It takes courage, it takes hard work, it takes discipline and it’s doable.”

“I will bet you there is not a single precinct in this state in which the majority will pick for their children food stamps over paychecks,” he said.

Gingrich isn’t the only Republican on the trail talking up Obama’s failures when it comes to minority populations. Rep. Michele Bachmann (R-MN) told an audience of Republicans in New Orleans that Obama “has failed the African American community” on jobs. She said that he’s failed the Latino community — which is also suffering from record unemployment — as well.

Most of Gingrich’s speech wasn’t about wooing minority votes. He spent much of his time on stage talking about a coming “tsunami of violence” from terrorists and warning that Obama’s “vision of the American Constitution is a mortal threat to our freedoms.”

This post is written by Evan McMorris-Santoro for Talking Points Memo and appears on Mediaite via a content sharing agreement.