No, Chris Christie and Hillary Clinton’s 2016 Hopes Aren’t ‘Toast’… Yet 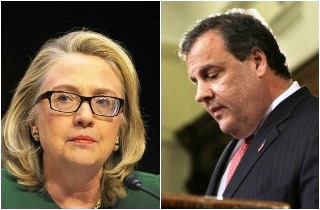 The political media has been guilty of using the word “toast” so often over the past week, you could be forgiven for thinking they’ve taken to filing their columns from a diner counter.

The scandal involving New Jersey Gov. Chris Christie’s aides apparently ordering lane closures on a major artery leading into New York City in an effort to exact revenge against a political adversary is a serious matter – one that does threaten to derail his hopes for higher office.

So, too, is the serious matter surrounding the deadly attack on an American consulate in Benghazi. The diplomatic outpost’s repeated requests for additional security, which were denied by an as-yet-unknown figure in the Obama administration, and documents declassified just Monday night which reveal that the White House was briefed on the night of the attack about the sophistication of that assault, are equally politically damaging for former Secretary of State Hillary Clinton.

It is a safe bet to assume that both scandals will haunt Clinton and Christie for years. Clinton’s declaration before Congress, “What difference, at this point, does it make” whether the attack was motivated by a YouTube video or not (and declassified documents reveal that the White House knew that wasn’t), will be played in a loop in 2015-2016. If Christie’s definitive denials that he was not directly or even tacitly involved in the prosecution of a vendetta against the Democratic mayor of Fort Lee are shown to have been misleading, then he, too, will never quiet his critics on that matter.

Both of these scandals are deeply resonant with the American electorate. For now, however, they are resonant with each prospective 2016 candidate’s opponents, not their party’s primary voters.

The often insightful National Journal political analyst and founder of The Cook Report, Charlie Cook, offered an uncharacteristically odd impression of Christie’s political prospects in the wake of “Bridge-Gate.” He insists that the conventional wisdom, buttressed by countless polls, which suggests Christie is the frontrunner for the GOP nomination in 2016 is flawed.

“Think for a moment who makes up the Republican Party, and most specifically the part of the GOP base that dominates the presidential nomination process,” Cook writes. “Think about the people they seriously considered for their party’s presidential nomination last time around. Think Michele Bachmann, Herman Cain, Rick Santorum, Rick Perry, and Newt Gingrich.”

It’s laughable that the party that has previously seriously considered some fairly inconceivable candidates as worthy of the GOP nomination would suddenly reverse course and head over to a center-right candidate such as Christie.

Cook bizarrely does not note that the GOP has only nominated “center-right” candidates since 1964. In fact, the case could be made that the most radically conservative presidential nominee the party fielded in the past half-century, by media standards, would have to be Ronald Reagan. History suggests that Christie can, and will, make the “electability” argument that propelled both Mitt Romney and John McCain to the nomination.

But Cook could have posted a similar column about the 2016 Democratic field. Clinton, too, has a base problem.

CNN political reporter Peter Hamby was recently dispatched to the great political petri dish in the Plains, Iowa, where he filed an exhaustive bit of reporting on the mood among first-in-the-nation Democrats. It was there that Clinton’s 2008 presidential bid was dealt the first cut, one that ultimately proved fatal. What Hamby found should terrify Clinton supporters heading into 2016.

“A restive and emboldened progressive base long suspicious of Clintonian moderation, a hunger for fresh Democratic voices, and a caucus electorate that boasts a cherished tradition of voting with its heart rather than its head,” Hamby observed.

He spoke with a number of Democratic power brokers in the state, vote-getters who are even more critical in a caucus setting where multiple ballots, some of them open, and the opinions of your voting neighbors are more important than the average primary, and found that many of them are open to an alternative to Clinton.

But the former secretary of state can take heart in the fact that each person Hamby spoke with was careful to note that no viable Clinton alternative exists today. That could change, and it likely will as more candidates enter the race, but cautious Democrats in Iowa are keenly aware that somebody usually beats anybody.

Likewise, the antipathy Christie generates from the GOP base is not unique to him. Virtually every establishment candidate has drawn the ire of base conservatives. They, too, presently cannot point to a viable alternative. Further, some conservatives, pleased by the press finally adopting an adversarial tone with Christie which they know will come to characterize a presidential run, are warming to the governor. Preliminary polls suggest that Christie has actually gained some support among Republicans as the scandal involving the George Washington Bridge unfolded.

Both Clinton and Christie have problems; both are wrestling with potentially disqualifying scandals and both must content with an ABC (Anybody But Christie/Clinton) base. But these are problems that can, and have, been overcome by weaker and less talented political actors than themselves. Expecting the unexpected is a good rule in politics. Anything can change in three years and there is ample precedent which indicates that that neither Christie nor Clinton will end up as their party’s nominee in 2016. As of today, however, neither prospective presidential candidate is anything close to “toast.”