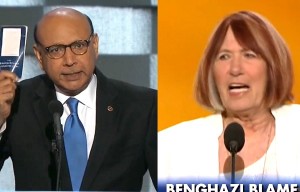 The pro-Trump right is out with a new talking point in their relentless battle against the Gold Star family of the lateCaptain Humayun Khan, a Muslim soldier who was killed in Iraq, and whose father Khizr Khan delivered an impassioned denunciation of Republican presidential nominee Donald Trump’s anti-Muslim policy proposals at the Democratic National convention. After several days spent going after Mr. Khan and his wife, then trying to sort of back off, then going after them again, the Trump camp has seized on a report by the Media Research Center to  deflect attention with a claim media bias.

The claim is that the media is covering the Khan story way out of proportion to the coverage they gave to the RNC speech given by Patricia Smith, the mother of the late Sean Smith, who was killed in the attacks on Benghazi. Here, though, is the MRC’s specific claim (emphasis mine):

While all the grieving parents deserve sympathy, the Big Three (ABC, CBS, NBC) network evening and morning shows seemed to only care about the parents that showed up at the Democratic Convention. Khizr Khan and his wife Ghazla’s DNC appearance earned 55 minutes, 13 seconds of Big Three network coverage, nearly 50 times more than Pat Smith, whose RNC speech honoring her son earned just 70 seconds of airtime.

In the days (July 19 to August 1) that followed Smith’s indictment of Clinton from the RNC podium, CBS (3 seconds) ABC (13 seconds) and NBC (54 seconds) gave her speech a total of just 70 seconds of coverage.

In the four days (July 29 to August 1) following Khizr Khan and his wife Ghazala’s speech NBC (31 minutes, 39 seconds), offered the most amount of time followed by ABC (14 minutes, 21 seconds) and then CBS (9 minutes, 13 seconds).

As it turns out, this is a checkable claim, and we did check, or at least, we checked the Khan family part of the claim. Conceding that the Patricia Smith speech only got 70 seconds from the Big Three (it got much more from the cable news networks), Mr. Khan’s speech did get more coverage. Here’s all of it in one place:

That one minute and forty-nine seconds is all of the coverage the Big Three devoted to Khizr Khan’s speech, which is more than 70 seconds, but not 50 times more. The rest of the coverage MRC attributes to the speech is actually coverage of Mr. Trump’s response to the speech, and the Khans’ responses to Trump. If this demonstrates a bias, it’s one in favor of covering Donald Trump.