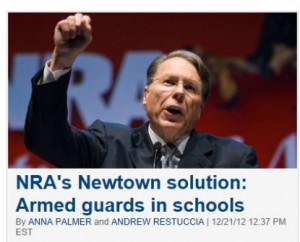 There was a lot to digest from Friday’s ill-advised press conference by National Rifle Association executive vice president Wayne LaPierre, in which the pro-gun, anti-regulation organization’s chief deflected blame for the mass shooting at Sandy Hook Elementary School away from the guns used to carry out the crime, but Breitbart.com’s John Nolte reached around the more obvious takeaways from the presser to slam Politico for publishing what Nolte calls a “Hitler photo” of Wayne LaPierre:

The above is the lead photo and story on Politico right now.

Although there were dozens of cameras at today’s press conference, in order to post their “Hitler pose,” Politico had to grab a photo that wasn’t even taken at today’s event.

Our media’s filled with horrible people, isn’t it?

It sounds silly at first blush, but maybe Nolte is on to something:

I’m not really seeing it, and more importantly, neither is Google. A Google search of “visually similar images” returns dozens of results, but no Hitler photos.

If your definition of a “Hitler photo” is any picture of a guy at a podium making gestures, then most pictures ever taken at press conferences are “Hitler photos,” because that’s the shot that news photographers always go for. Don’t take my word for it, watch the press conference. Every time LaPierre moves his arms, you can hear the shutters clicking away. Politico probably used this shot because they pre-wrote some of the post to get it out quicker, rather than wait for a shot from this presser, or use a low-quality screen-shot.

Still, if Wayne LaPierre reminds John Nolte of Hitler so much, who am I to argue? It’s worth noting, though, that in a story about an NRA press conference held exactly one week after reports of the mass shooting first appeared on television, John Nolte’s idea of a “horrible person” is some photo editor at Politico.