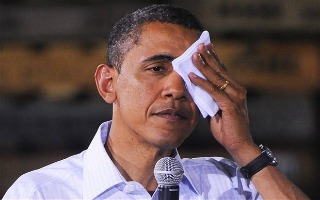 Even the staunchest of Mitt Romney’s supporters would have to concede that the GOP presidential candidate has been on the defense against a relentless assault by President Barack Obama’s campaign in recent weeks. Today, the tables have turned. The Romney campaign has been hammering Obama on his “you didn’t build that” comments and that appears to have spooked the Obama team into cutting a web ad that accuses Romney of misrepresenting those remarks. But their defensive posture betrays the effectiveness of the Republican presidential candidates attacks and the folly of Obama’s defense of collectivism over individual achievement.

For months, the Chicago team coordinating the President’s reelection effort has hounded Romney on releasing his tax returns and his tenure at Bain Capital. The attacks have ranged from the spurious or superficial to the genuine and legitimate. Even in fighting back against the Obama campaign team’s attacks, Romney has appeared small and flustered.

All that changed this week after President Obama’s remarks about the private sector in which he echoed Massachusetts senate candidate Elizabeth Warren‘s full-throated defense of progressivism from last September. Romney seized on those remarks and has gone on the attack. Now, with the tables turning, the Obama reelection team is the campaign on the defensive. In the latest web ad from the Chicago team, the campaign accuses Mitt Romney of lying – rather, being willing to say “anything to get elected” – and says he is misrepresenting the President’s “you didn’t build that” comments.

Lest the Obama campaign accuse us of misrepresenting the President’s comments, (which we printed in full here), let’s post the relevant portion here:

If you were successful, somebody along the line gave you some help. There was a great teacher somewhere in your life. Somebody helped to create this unbelievable American system that we have that allowed you to thrive. Somebody invested in roads and bridges. If you’ve got a business, you didn’t build that. Somebody else made that happen. The Internet didn’t get invented on its own. Government research created the Internet so that all the companies could make money off the Internet.

For those predisposed to believe progressive orthodoxy, that private success is not possible without the support of a robust society and that Americans’ revulsion to collectivism is knee-jerk, the President’s remarks are perfectly acceptable. In fact, progressives might say that Obama’s comments highlight a fundamental truth and it is high time that an American President defended this ideology without qualification.

The problem for Obama, however, is that self-identified progressives make up only a small portion of the electorate. Most voters do not believe that society is more relevant to their success than their own effort. In most voters’ view, the United States is a meritocracy and the success of others is to be admired. Most Americans do not covet their neighbors’ good fortune — they seek only to achieve their own success. President Obama’s comments are anathema to the belief of the majority of Americans who see self-reliance is a virtue.

‘But what evidence do you have to support this wild claim,’ you ask. How about this poll from July that shows 58 percent of adults who say that the wealthy deserve their largess – up a point from 2008? Or maybe this poll from June that shows three quarters of the electorate are purely indifferent to Romney’s much-publicized riches. Or how about a May poll from Gallup that shows 63 percent of Americans approve of having a class of wealthy individuals and think it benefits society as a whole – up a point from 1990. That result, by the way, includes a majority of Democrats.

Need more evidence? Well, the Obama campaign’s web ad above should suffice. Campaigns do strike defensive poses like this without the data to back up the utility of this kind of ad. The Obama campaigns response — and even the fact that there has been a response at all — is telling.

That is not to say that the public is deaf to the Obama campaign’s messaging. A recent CBS/New York Times poll that showed Romney with a single point lead over the President shows that a majority of voters think Romney’s policies would favor the rich. But voters are not heading to the polls this year with class envy in their hearts, as if they ever have. The state of the public treasury, in conjunction with the lackluster economic recovery, will inform the electorate’s vote. This year will not be a referendum on Mitt Romney, the wealthy, income inequality, reproductive rights or student loan interest rates. 2012 will be a referendum on President Obama’s fist term.

The Republican presidential nominee is finally off the ropes. It may well be short lived, but the Obama campaign is well and truly on the defense today.