Obama: People View Me Through Prism of a ’Fictional’ Obama That TV, Fox, Limbaugh Created 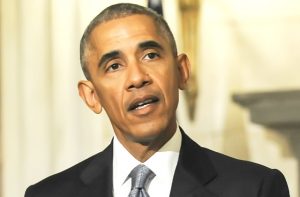 President Obama sat down with The Atlantic‘s Ta-Nehisi Coates for a series of interviews for Coates’ ‘My President Was Black’ feature, and the president had a lot to say about race and the media in the past eight years.

The Atlantic yesterday and today posted the first and second of those interviews, and in both he invoked Fox News and Rush Limbaugh in talking about public perceptions of himself.

In the first interview, he said, “In 2008 I was never subjected to the kind of concentrated vilification of Fox News, Rush Limbaugh, the whole conservative-media ecosystem, and so as a consequence, even for my first two years as a senator I was polling at 70 percent.”

This, the president continued, did not last:

[T]hey weren’t seeing some image of me as trying to take away their stuff and give it to black people, and coddle criminals, and all the stereotypes of not just African American politicians but liberal politicians. You started to see that kind of prism being established towards the end of the 2008 race, particularly once Sarah Palin was the nominee. And obviously almost immediately after I was elected, it was deployed in full force. And it had an impact in terms of how a large portion of white voters would see me.

And what that speaks to—and this is something I still strongly believe—is that the suspicion between races, the way it can manifest itself in politics, in part comes out of people’s daily interactions and the fact that we’re segregated by communities, and by schools, and our churches, and people’s memories passed down through generations.

Obama recently said that the Democrats’ inability to reach certain voters is due in part to “Fox News in every bar and restaurant.”

And, as it happens, Obama recalls an anecdote Bill Clinton shared with him that a close ally of his told him years after his presidency that he probably couldn’t win Arkansas now because local papers “are all gone and if you go into any bar, you go into any barbershop, the only thing that’s on is Fox News.”

Coates asked Obama if there’s something to the idea that he was more likable to certain people when he wasn’t in power, but when he took office as the first black president, “that activated their fears.” Obama said there are certainly a lot of people “taking as truth… that this black president is trying to hurt you or take something from you and looking out for ‘his own.'”

In the second interview, which focused in particular on combating discrimination both on an institutional and a personal level, there was a moment when Obama talked about the criticism he’s received from both sides in the past eight years, including from young liberal activists.

He said both on the left and the right people are responding to and engaging with the “character” Barack Obama they see in the news:

[O]ne of the things that you come pretty early on to understand in this job, and you start figuring out even during the course of the campaign, is that there’s Barack Obama the person and there’s Barack Obama the symbol, or the office holder, or what people are seeing on television, or just a representative of power. And so when people criticize or respond negatively to me, usually they’re responding to this character that they’re seeing on TV called Barack Obama, or to the office of the presidency and the White House and what that represents. And so you don’t take it personally. You understand that if people are angry that somehow the government is failing, then they are going to look to the guy who represents government. And that applies, by the way, even to some of the folks who are now Trump supporters. They’re responding to a fictional character named Barack Obama who they see on Fox News or who they hear about through Rush Limbaugh.