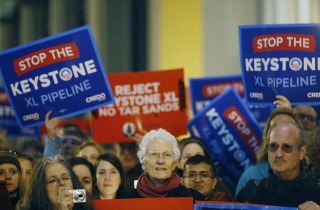 The federal review process in which a variety of federal agencies scrutinize the impact of the proposed the Keystone XL Pipeline, applications for which were originally submitted to the State Department in 2008, has been extended yet again. This time, the deadline may extend to well past the 2014 midterm elections.

President Barack Obama‘s White House was expected to weigh in with their final decision at the end of May, but the process of “review” may even outlive the Obama presidency.

CNN’s Lisa Desjardins reported on Friday afternoon that the process of examination is being extended “indefinitely.”

Keytone opponents say the pipeline, which would link Canadian tar sands fields to refiners on the Gulf Coast, could result in damaging spills in the sensitive areas over which the pipeline is built, may damage the climate as the heavy crude contains more carbon than other forms of fossil fuel, is expensive to construct, and will only spur more oil exploration and production.

Heading into a midterm election in which 8 in 10 Republicans say they are enthusiastic to vote, and Democrats confess they are much less enthusiastic about voting in November, Obama cannot afford to give his base any more reasons to stay home.

Borrowing some of the rhetorical flourishes Democrats popularized during the 2013 government shutdown, Keystone has become a hostage to the Democratic Party’s political base.