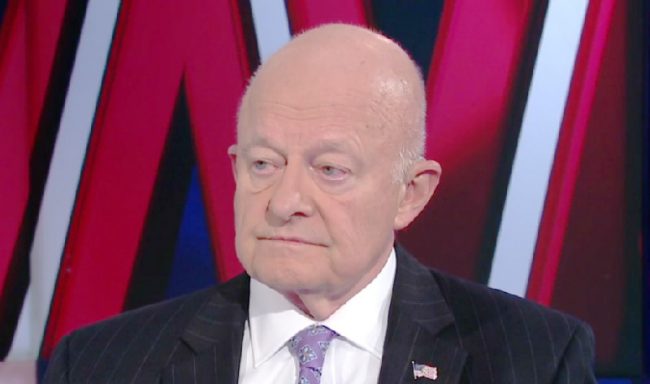 Earlier this week CNN reported what radio talk show host (and former Justice Department official) Mark Levin revealed in March, that secret FISA court orders had been implemented during the Obama Administration to wire tap Paul Manafort. Mediaite then pointed out that the former Director of National Intelligence under President Obama, James Clapper, had unequivocally denied the existence of any such FISA wiretap during an interview on Meet the Press:

CHUCK TODD: Yeah, I was just going to say, if the F.B.I., for instance, had a FISA court order of some sort for a surveillance, would that be information you would know or not know?

TODD:  You would be told this?

CLAPPER:  I would know that.

TODD:  If there was a FISA court order–

TODD:  And at this point, you can’t confirm or deny whether that exists?

CLAPPER:  I can deny it.

Please pay careful attention to the words used in the above exchange. Chuck Todd lays out a very specific scenario.  If the FBI had a FISA order for surveillance of a member (or members) of the Trump campaign team, would James Clapper know about it? Clapper stated with no ambiguity that he would. He went on to firmly and uncategorically deny it.

Obviously, Mr. Clapper had some explaining to do. Last night on CNN, he had the opportunity to do just that in an exchange with Don Lemon:

"Its possible" President Trump's voice was picked up in a wiretap of Paul Manafort, says former spy chief Clapper https://t.co/2ELM48axAa

Lemon asked Clapper, “Did you know about a FISA warrent against Paul Manafort at the time.” Clapper said, “I did not.”

Lemon went on to ask Clapper hypothetical questions about the reported FISA surveillance:

LEMON:  Is it possible the president was picked up in a conversation with Paul Manafort?

LEMON:  Is it likely?

CLAPPER  I can’t say. I wouldn’t want to go there. I will say it’s possible.

This exchange appears to escalate the FISA wiretap story of Paul Manafort to a whole new level, if the media is interested in pursuing it.

James Clapper was the Director of National Intelligence overseeing the surveillance and intelligence gathering of seventeen different government agencies. He has correctly asserted that if there was a FISA order to wiretap an American citizen he would know about it. CNN has now confirmed that the FBI had just such an order to monitor Paul Manafort. This leaves us with only a handful of conclusions.

Either way, we either have a very sick man in James Clapper, or we have a scandal brewing that could shatter the media’s love affair with the Obama presidency. If they’d only have half an interest in pursuing it.