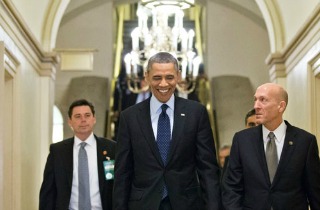 A “diminished leader.” “A study in scaled-down ambition.” “None too ambitious.”

These are some of the reactions to President Barack Obama’s State of the Union address on Tuesday night from prominent media outlets like the New York Times, POLITICO, and the National Journal. It’s not that agenda items the president articulated last night are so modest themselves, it’s simply that articulating the same agenda two years in a row with little to show in the way of progress is dispiriting.

What seemed like an ambitious agenda in 2013 appears “scaled down” in light of the fact that much of it was never enacted.

The reaction from the establishment press is, however, instructive. Obama’s political stature ebbed so much in 2013 – an annus horribilis from the White House’s perspective – that the symptoms associated with lame duck status have set in far earlier than they would have in a vacuum. Much to this president’s dissatisfaction, the political press – left, right, and center – is focused squarely on 2016 and Obama’s successor.

But there is no tomorrow for the president. An increasingly competitive Senate landscape with Republicans becoming openly bullish on races in nontraditional states like Oregon and Michigan is making the White House nervous. With few analysts expecting more than modest Democratic gains in the House, the prospect of Obama finishing his term with a Congress in full Republican control is all too real.

Given these prevailing conditions, the president’s outreach to interviewers with credibility in conservative circles is both telling and smart. For the first time since 2011, Obama will sit down with Fox News Channel’s Bill O’Reilly – cable news’ most watched host — in a nationally televised interview set to air before the Super Bowl. On Wednesday, the White House announced that this interview will be preceded by a one-on-one session with CNN host Jake Tapper, a cable news host who arguably maintains more bipartisan credibility than any of his peers.

Obama’s “scaled-down” agenda may not resonate with the press, but it does resonate with voters. As flagged by The Washington Examiner’s Byron York, the Democratic polling firm Democracy Corps, founded by respected Democratic campaign veterans James Carville and Stanley Greenberg, observed that focus group respondents reacted positively to the narrowly defined policy proposals Obama articulated on Tuesday night.

While the media was unmoved by Obama’s State of the Union performance, items like wage “fairness,” job training, and a hike in the federal minimum wage struck the right chords with those persuadable voters. Those voters are not watching MSNBC.

The media was not impressed by Obama’s agenda last night, and the White House seems to have concluded that they may never be again. The aggressive, sweeping progressive agenda they would like Obama to communicate is simply beyond his constitutionally-constrained ability to deliver. Obama may threaten to use his “pen” and “phone” to sidestep Congress, bluster which puts smiles on the faces of his base supporters who are increasingly disappointed with the unfulfilled promise of the Obama presidency, but the president’s media strategy gives the lie to this base-mollifying effort.

Obama’s “none too ambitious” agenda is attainable, and articulating it in venues where swing voters are listening could mitigate the risks Democrats face heading into November. Obama may pay lip service to the unrealistic expectations of his remaining supporters in the media, but his actions show that the administration is taking a sober approach to the midterms.

Politics, as they say, is the art of the achievable. Pleasing Obama’s progressive base with grand and far-reaching reforms is, today, simply out of reach. But rescuing a floundering second term with modest achievements is a realistic goal. With that in mind, Obama is turning his back on MSNBC and the New York Times and heading to Fox News and CNN.