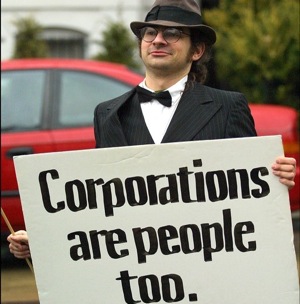 On the cusp of the first major national elections since the Supreme Court ruled corporations have the First Amendment right to speech in politics, the echo chamber of public political discourse sounds all the louder with all those extra voices. While on legal grounds it’s unclear what it is about Citizens United that seems to evoke hysteria in many talking heads, they have good reason to want to lower the volume: to better hear themselves talk.

Citizens United is the Supreme Court decision handed down this past January that allowed for corporations to donate to political organizations under the same rules as individuals, based on the First Amendment (this is why it is often facetiously referred to as the “corporations are people, too” ruling). The donations in question were from corporations to the group Citizens United, which sought to air a documentary against Hillary Clinton during the 2008 campaign, but its corporate funding forbade it from doing as per the Bipartisan Campaign Reform Act (otherwise known as the McCain-Feingold bill). The Supreme Court overturned the sections of BCRA specific to corporate financing in ruling in favor of Citizens United.

The ruling is still a fresh wound to many who oppose any corporate presence in politics, definitively giving corporations the same free speech rights as citizens under the law, thus allowing them to spend money to advocate for positions or candidates they like or dislike (contributions directly to campaigns are still forbidden.) But for some legal scholars (and, obviously, for a majority of the Supreme Court), much of the media outrage seems unwarranted. First Amendment attorney and Mediaite dad Floyd Abrams who argued the case in the Supreme Court on behalf of Senator Mitch McConnell details in an extensive Yale Law Journal piece just what that outrage entailed:

“[T]here were the journalists, typified by CNN’s Jeffrey Toobin, who characterized the opinion as resting on “bizarre legal theories,” and Newsweek’s Howard Fineman, who dismissed the decision as “one of the more amazing pieces of alleged jurisprudence that I’ve ever read.” The New York Times, in separate editorials, excoriated the ruling as “disastrous,” “terrible,” and “reckless.” […]

President Obama, a former professor of constitutional law, denounced the ruling when it was released and then again in his State of the Union speech without even adverting to the Court’s reliance on the First Amendment. The Nation magazine published a five-page editorial condemning the ruling and urging adoption of a constitutional amendment to overturn it without even mentioning its First Amendment roots. And E.J. Dionne, Jr., in five columns published in the Washington Post both before and after the ruling, first warned of and then denounced the Court’s “astonishing display of judicial arrogance, overreach and unjustified activism.”

“The ruling was treated as a desecration,” he laments, making the point that Citizens United seemed to elicit a more negative reaction than even the recent case where the Supreme Court defended videos of stilettoed women killing kittens with their heels (a sample of which you can watch, thanks to Rick Sanchez, here). Both were decided on the same grounds of freedom of speech. He goes on to elaborate on significant legal precedent in the protection of political speech and campaign finance regulation to make the point that the argument in Citizens United was one recycled out of past First Amendment rulings, often (but not always) involving the press and always celebrated by the media. The facts, he concludes, lead one down a path completely incongruous with what much of the peanut gallery has to say. (It’s also worth noting that peanut gallery including the New York Times, CNN and even Mediaite are all corporations.) The most perplexing part, he concludes, about the reaction to the decision is that many detractors “often chose not to respond to—sometimes not even to mention—Justice Kennedy’s First Amendment analysis in the majority opinion at all, as if the Court had simply ruled that Congress had passed a law with which it emphatically disagreed and would therefore strike down.”

Such is the frustration of attempting to explain away spin with facts.

Rather than assume the media’s endgame is facts, sometimes getting at a reasonable answer requires a bit more of a cynical take. There is certainly an endgame to the visceral reaction against people who aren’t in the business of talking politics being allowed to talk politics, and it isn’t objective. It isn’t even partisan, though right-wingers may look askance an opposition composed of Barack Obama, the New York Times, and The Nation. Those who oppose Citizens United in the media uniformly have one thing in common: they are professionals who discuss political campaigns. They depend on what the Citizens United Hillary Clinton ad aimed to do to put food on the table, no matter whose side they’re on. And people who talk about politics for a living don’t appreciate the threat of their voices being drowned out be people who don’t talk about politics for a living. This is a general rule of thumb.

As political commentary increasingly democratizes thanks to the social media, it can get very, very loud in the public sphere, and it is fairly easy for voices to get drowned out. In such a competitive talking head atmosphere, allowing entities that aren’t even human beings to have their say feels a little bit like when someone plays words like “ai” or “xu” in Scrabble— the rules say they count, but it feels quite wrong that they should. Thus, journalists and media personalities have a vested interest in not having First Amendment rights expanded to make more aggressive the marketplace of ideas in which they are merchants.

That’s not to make a blanket generalization that all politicos who oppose the Citizens United decision are acting to protect their own personalities– on the contrary, the language Abrams cites from Justice Elena Kagan that corporations could have a “corrupting” effect on the political process are valid concerns that many in the media express earnestly. But they are mostly partisan concerns, unless the corrupting has more to do with corruption of the discourse than of any individual wallet. Only this understanding could the scope of the media’s rejection of the Citizens United principles really fit the scope of the decision’s impact.