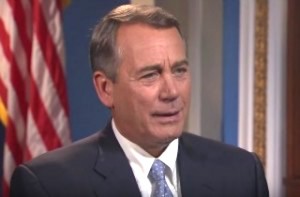 But it wasn’t just any birthday tweet. No, it was a musical birthday tweet. Because Speaker Ryan made sure to include musical notes (♫) on either end of his two-line lyric.

.@SpeakerBoehner: ♫This is your birthday tweet … I hope your day is sweet♫ pic.twitter.com/AFpnXuXDUB

The notes suggest a tune of some sort, and our best guess is the jokey “This Is Your Birthday Song, It Isn’t Very Long” meant for children ages three to eight.

It’s a cute show of respect for the older Boehner, but Ryan’s apparent goofiness on social media got me thinking. Has the 54th Speaker of the House ever used Twitter for similar shenanigans in the past? The answer is yes, especially when it comes to birthdays.

@SpeakerRyan is a fairly recent account, but Ryan’s team has used @PRyan since August 2012, when he entered the presidential race as Mitt Romney‘s running mate on the Republican ticket. He’s wished Romney a happy birthday.

Join Janna and me in wishing a very happy birthday to our good friend @MittRomney. — Paul Ryan (@PRyan) March 12, 2013

In fact, he’s highlighted Romney’s day of birth every year for the past three years. He even used the #tbt (Throwback Thursday) hashtag for the last two, possibly as a friendly reminded of their failed political campaign.

.@MittRomney is a great man and a great friend. Happy Birthday, Mitt! pic.twitter.com/uj3VDssSwJ

And, of course, his old pal Boehner.

Happy 65th birthday to my friend @SpeakerBoehner. Thanks for all you’ve done for Ohio and the country.

Ryan isn’t consistent with his birthday wishes, unless he’s wishing a happy one to Romney. He always wishes the former Republican presidential candidate a happy birthday. It’s almost like he can’t not wish Romney a happy one. (I suspect some kind of Illuminati curse.)