One month ago we witnessed the worst mass shooting in American history when an assailant armed with modified automatic weapons took aim at concert-goers and killed 58 people and injures over 500 more. Yesterday afternoon, an Uzbek national drove a rented truck down a Lower Manhattan jogging path, killing eight individuals and injuring 13 more.

Both instances are tragedies and spawned immediate wall-to-wall coverage on cable news, launching dozens of hot takes for predictable precincts. And while the attacks were deadly, the political reactions to both reveal inconsistent rhetoric and shameless hypocrisy, that while entirely predictable, should not go without recognition.

After the Las Vegas massacre, many on the left immediately called for a renewed national discussion on gun control. They questioned how this individual amassed an arsenal of almost 50 guns, many of which were semi-automatic assault weapons modified for automatic rapid firing?

But guns rights proponents felt that question — or even any conversation — about increased regulation in the days that followed that tragedy, were, at best, inappropriate and at worst disgustingly and overtly political. The argument was that it was far too soon to discuss gun rights policies and insensitive to the victims to use such a tragedy to score political points.

As I wrote in the days that followed the Vegas shooting, the scariest part of the entire ordeal was the defeatist approach that many conservative thought leaders promoted just after the worst American mass shooting. Laura Ingraham proclaimed that nothing could be done to stop such attacks, Bill O’Reilly oddly suggested that the mass shooting was “the price of freedom,” while Jason Chaffetz also insisted that nothing that could be done. Lessening the frequency of such a random and deadly attack seemed a lesser priority to these political pundits — and their significant audiences — than stifling any discussion on any more effective gun regulation.

Cut to this morning as we awoke to predictable politicized media reaction after the worst terror attack in New York City since September 11, 2001.

Instead of an angry call to hold off on talking politics and/or policy so shortly after this deadly attack, we saw volumes of those same politicos call for immigration reform, a call to limit vehicle access to those who fit the “radical Islamic” profile, and transparent finger pointing at New York Senator Chuck Schumer for the Diversity Visa Program he co-authored in a 1990 Immigration reform bill, years before radical Islamic terrorism was a widely discussed threat to U.S. soil.

This is best exemplified by President Donald Trump’s tweet that ostensibly lays the blame for this attack at the feet of Schumer:

The terrorist came into our country through what is called the “Diversity Visa Lottery Program,” a Chuck Schumer beauty. I want merit based.

And Trump did not go on this early politicization journey alone. As has been the case so far with this White House, morning-side Fox News programming walked lockstep with Trump.

ShareBlue’s Oliver Willis tweeted out the following image listing the many examples: 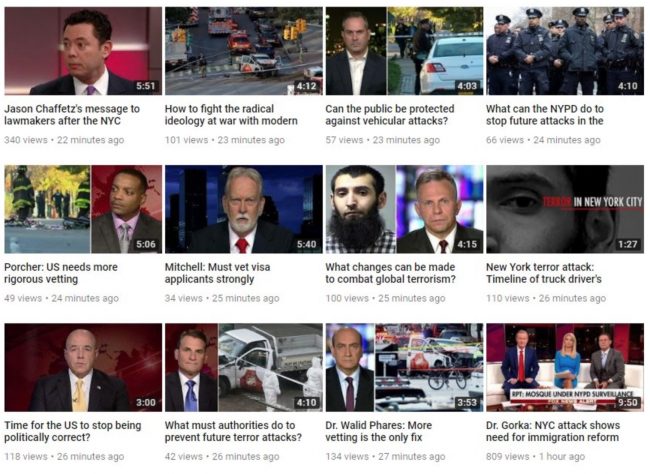 As quickly as we saw the overt politicization of this tragedy, we saw critics pounce back. Senator Schumer, Governor Andrew Cuomo, Mayor Bill de Blasio and Joe Scarborough are just a sampling of political and media figures to call out the flagrant hypocrisy in playing politics so quickly after this recent terror attack.

The bottom line is this. When these these sorts of tragedies happen, there absolutely should be a healthy debate about which policies that we can consider and eventually institute that helps us lessen the frequencies of these things happening again. We do not live in a perfect world, and yes, evil people exist in the world and will forever continue to do bad things.

But if political and media leaders on the right are so quick to use a local terror attack to exact immigration reform designed to make us all safer, then they cannot possibly claim that we cannot have a discussion on improved gun regulations also designed to keep us safe on the day after a mass shooting. It’s not just hypocritical, its downright dangerous, destructive and disgusting.