Politician to Female Colleague: You’re Not Worth Raping
video

Politician to Female Colleague: You’re Not Worth Raping 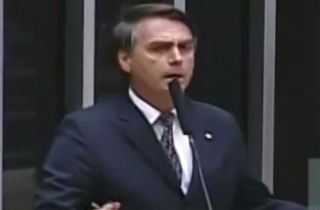 A Brazilian politician has come under fire this week for actually, seriously telling a female colleague in public comments this week that he would never rape her because she’s not worth raping.

Congressman Jair Bolsonaro was responding to colleague Maria do Rosario supposedly calling him a rapist in a private setting. And that’s when he made the unbelievable statement that she wouldn’t be worthy of being raped by him if he were to do such a thing, implying, of course, that there are women “worthy” of the “honor.”

And remarkably, this is not even the first time Bolsonaro has said this. In fact, he made the exact same comment about the exact same female colleague years ago, as detailed in an Intercept report titled “The Most Misoynistic, Hateful Elected Official in the Democratic World.”

Oh, and Bolsonaro didn’t even bother apologizing, and even bragged about the moment on Twitter:

That roughly translates to, “After lying about the military era, Bolsonaro puts do Rosario in her place.”

For the record, Bolsonaro denied what he said on video to The Intercept and tried to turn the tables by asking, “Do you think she’s good enough to be raped?”

There’s video of Bolsonaro’s remarks (not in English, though), which you can watch below: