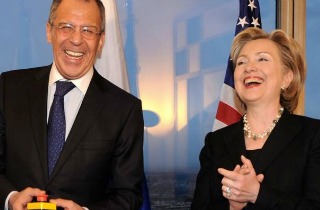 The military crisis in Ukraine precipitated by a Russian invasion of the Crimean peninsula may be giving way to a political crisis in the United States among Democrats laying the groundwork for a potential presidential bid by former Secretary of State Hillary Clinton in 2016. Writing in POLITICO on Tuesday, reporter Maggie Haberman sounded warning bells for Democrats backing Clinton, noting that the former first lady served as the “face” of President Barack Obama’s now demonstrably flawed “Reset” of relations with the Russian Federation.

“Clinton is inextricably tied to another administration over which she yielded only partial influence,” Haberman reported. “And as President Barack Obama grapples to resolve the expanding crisis in Ukraine, the situation underscores Clinton’s dilemma as she looks toward a potential presidential run in 2016: Separating from the White House is a very difficult proposition, if it’s possible at all.”

Haberman added that Clinton became the most visible ambassador for the “Reset,” selling that policy to both the Russian government and the American public. Haberman noted that the defenders of that policy in the White House say that great advances in relations were made while former Deputy-Prime-Minister-turned-President-turned-Prime-Minister Dimitry Medvedev served as the country’s chief executive. Only when Vladimir Putin returned to the presidency, a role he never truly left but merely temporarily ceded to Medvedev due to constitutional constraints, did that policy begin to sour.

This preview of the administration’s defense of the “Reset” reads much more like an admission of failure.

The crisis in Ukraine has upended much of the prevailing conventional wisdom relating to the 2016 race. Sen. Marco Rubio (R-FL), who never recovered in polls of Republicans after he embraced a plan to reform the nation’s immigration system, is seeing renewed interest in his political brand as one of the few prospective 2016 candidates with the ability to articulate a foreign policy vision based on global engagement. But where Rubio’s fortunes are on the rise, Clinton’s are declining.

Where Clinton’s biggest liability as Obama’s first Secretary of State had been a lack of demonstrable accomplishments, Clinton’s legacy can now plausibly be spun by Republicans as one marked by complacency and appeasement.

The administration’s misguided “Reset” with Russia is unlikely to damage Clinton ahead of the Democratic primaries where, in stark contrast to 2008 when Clinton represented the party’s “liberal wing,” there is no room to her right. But the renewed relevance of America’s approach to foreign policy, and the administration’s failed recalibration of the relationship with Russia, is likely to provide Republicans with ammunition to use against Clinton in a general election.