“Potentially Dangerous”? Fox News Gets To The Bottom Of Bros Icing Bros 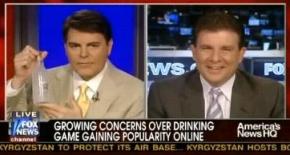 Are you familiar with the new Bros Icing Bros craze?

Well if you’re a Fox News viewer, you got a taste of the Smirnoff Ice activity/publicity stunt/viral marketing campaign with a news segment this weekend on the “potentially dangerous drinking game.”

“It’s called [pause for dramatic effect] Icing Your Bro,” said FNC anchor Gregg Jarrett, introducing a report this weekend about “Bros Icing Bros” (quick recap: force your bro to chug a Smirnoff Ice). “Should Smirnoff be on the offensive here, discouraging a game that flies in the face of responsible drinking?” asked Jarrett.

Luckily there was an actual guest to answer this question. Dominick Tavella, President of Diversified Financial Consultants got a chance to weigh in. “Let’s hope they act a little more responsibly and maybe this fad will go away,” he said.

Well…not likely, considering there are now news stories about the “fad,” complete with the anchors and guest laughing as they watch the user-generated icing videos. Meanwhile, Smirnoff is denying any involvement, but certainly having some fun with it – “we never want underage icing,” said their statement.

But Jarrett seemed to undermine his whole argument by revealing how non-threatening these Smirnoff Ice drinks really are. “It would take about a case of drinking these things to get tipsy, that’s how low the alcohol content is on these things,” he said. While he may know his beer and beer-like ultra-sweet bottled drinks, he isn’t too familiar with Jagermeister, which he referenced but used the hard J. (Co-anchor Juliet Huddy corrected the pronunciation.)

According to TV Eyes, this was the first cable news segment on the new game – so far. Also, check out the image. Did Jarrett ice Tavella via satellite?