Priebus Responds To Matthews’ Grilling On Morning Joe: He’s ‘The Biggest Jerk In The Room’

Priebus Responds To Matthews’ Grilling On Morning Joe: He’s ‘The Biggest Jerk In The Room’ 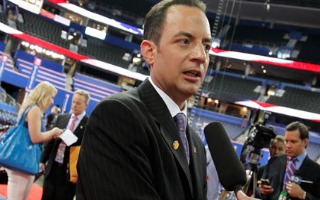 Republican National Committee Chairman Reince Priebus was on the receiving end of thurough grilling from MSNBC host Chris Matthews while the two appeared on Monday’s Morning Joe. Matthews accused Priebus, his party and their presidential nominee of knowingly employing coded racism in their campaign against President Barack Obama. Priebus kept his cool during that segment, but in an interview with National Review’s Jim Geraghty, the RNC chairman responded to Matthews by calling him “the biggest jerk in the room.”

Priebus responded to criticism that he was too deferential to Matthews while his party and their presidential nominee were being defamed on cable news. Priebus replied to that charge saying that, when someone is being “the biggest jerk,” it is sometimes best to “just let them go.”

When someone wants to grab the flag and try to be the biggest jerk in the room, sometimes you just let them go…. We shook hands, but I will tell ya that someone from MSNBC, I don’t know if it’s a producer or somebody, has been trying to call us all day – I’m sure it’s to make amends, but there’s nothing to make amends [about]. When somebody wants to take the prize of being the biggest jerk in the room… I mean, he made the case for us. This is the Barack Obama surrogate of 2012. This is what they’re all about. They’re going to be about division, they’re going to be about distraction. And I’ve got to tell you, the brand of Barack Obama, hope and change and bringing us all together, it’s completely broken. When people come to realize that you’re not real anymore, you’re not who you said you were, that’s a big problem for Barack Obama.

Asked if he would go on MSNBC again, he said, “I’m happy to go on MSNBC. Joe and Mika, they weren’t too happy about it. The feeling in the room was clearly there was a lot of happiness directed at Chris. I don’t really care. If more than 10 people actually watched his show, I would actually care, but they don’t, so, whatever.