Rapper Big Boi Refuses To Get Behind Obama Presidency: ‘I Ain’t On Nobody’s Team’

Rapper Big Boi Refuses To Get Behind Obama Presidency: ‘I Ain’t On Nobody’s Team’ 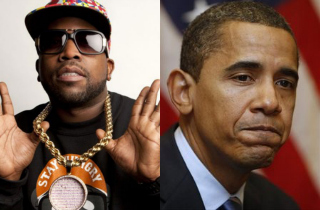 In a recent interview with Pitchfork Media, Grammy-winning rapper Big Boi expressed his disenchantment with President Obama, and recoiled at the notion of being associated with people who cheer on the government at the expense of the people.

Asked about his 2008 promo single “Sumthin’s Gotta Give,” in which guest-singer Mary J. Blige added lines about cheering for Obama, Patton expressed dissatisfaction with being associated with such opinions:

BIG BOI: I didn’t tell her to do that.

PITCHFORK: No? She just did it?

BB: On my damn record. I had a problem with it. I’m not pro-government at all, I’m pro-people.

The deeper-voiced half of Grammy-winning duo OutKast went on to elaborate that “our freedoms are getting taken away every day with things that people aren’t aware of.” For instance, he cited, the National Defense Authorization Act of 2012, which essentially authorizes the U.S. government to pick up and imprison, without charge or trial, civilians anywhere in the world.

“I don’t care who the president is — it ain’t just all about who’s black or who’s white or who’s Republican or Democrat, it’s about who is for the betterment of people, period,” the rapper continued.

Finally, Pitchfork asked: “Do you have any feelings about Obama’s first term now that he’s been re-elected?”

A reticent Big Boi replied: “Nope. What did he do? They say he’s trying to clean up a mess, right? Well, he needs a big-ass broom, and he gotta keep on sweeping. I ain’t on nobody’s team, you feel me? I’m about the American people.”

Big Boi’s comments are especially inspiring for a genre whose superstars, by and large, have thrown their support behind the president without much (if any) criticism for the very policies that would make him an unattractive politician to rappers who’ve, in the past, spoken out about American foreign policy, the drug war, and corporatism.

With the highest-profile rapper Jay-Z firmly in Obama’s camp, Big Boi’s comments come as a refreshing reminder that rap’s superstars still have the potential for subversive thought and behavior.

He joins Lupe Fiasco, who took flack from both the left and the right after decrying Obama as a “terrorist” for continuing much of the Bush-era foreign policy.

On a similar level, Killer Mike‘s critically-acclaimed 2012 record R.A.P. Music includes the song “Reagan,” which, at one point, identifies Obama as “just another talking head telling lies on teleprompters” about the drug war, poverty, and terrorism.

This is not to say that Big Boi, Lupe Fiasco, or Killer Mike should have associated with the main alternative in Republican candidate Mitt Romney. Of course not. It’s a given that on civil liberties and the drug war, Romney would be just as bad if not much worse. But for a genre that has long made a reputation on not associating with those in power, those three’s comments are a great reminder that even the genre’s biggest stars can’t be tempted by the sweet aroma of associating with government power.

For the uninitiated, check out OutKast’s commonly-interpreted-as-anti-war 2000 classic “B.O.B. (Bombs Over Baghdad)”: