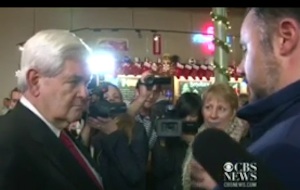 During a campaign stop in Oskaloosa, Iowa, Republican hopeful Newt Gingrich allegedly told a gay Iowan he would be better off voting for President Obama.

According to the Des Moines Register’s Jason Clayworth, Scott Arnold, an associate professor of writing at William Penn University, approached the former Speaker of the House and “asked him if he’s elected, how does he plan to engage gay Americans. How are we to support him?” “He told me to support Obama,” said Arnold.

Update: Newly obtained video has been posted by The Washington Post of the exchange, watch below.

Clayworth reports on the exchange:

“When you ask somebody a question and you expect them to support all Americans and have everyone’s general interest,” Arnold said. “It’s a little bit frustrating and disheartening when you’re told to support the other side. That he doesn’t’ need your support.”

Clayworth notes that Gingrich has a half sister who is a lesbian and said recently in Iowa that same-sex marriage “is a temporary aberration that will dissipate.”

ARNOLD:: So what if it is the biggest issue?

GINGRICH: Then I won’t get their support.

ARNOLD: And how do we engage if you’re elected, though? Then, what, what does that mean?

GINGRICH: Well, you engage in every topic except that.

ARNOLD: Except the one that’s most important.

GINGRICH: Well, if that’s the most topic important to you…

ARNOLD: To many millions of people.

GINGRICH: Well, if that’s the most important to you, then you should be for Obama.

ARNOLD: I am, but thank you.

Watch the exchange below via CBS: