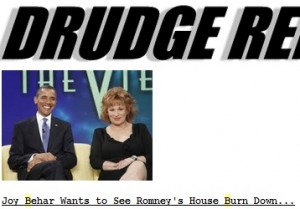 Freshly-minted Current TV star Joy Behar caused quite a stir in the right-wing blogosphere during part one of her interview with Mediaite, published Tuesday. In responding to Mitt Romney‘s comments in opposition to putting cops, firemen, and teachers back to work, Behar wondered what the implications would be were one of Romney’s homes to catch fire. Conservative blogs focused on a particular phrase she used, and in the process, generated a coveted Drudge link, while revealing their own screwed up priorities.

In what seemed like an uncontroversial, but very funny, part of the interview, I asked Joy how she felt about Romney’s remarks, which she hadn’t heard. When I relayed his comments to her, she said “That’s an idiotic statement! Can I just say that? I mean, I’d like to see his house burn, one of his million houses burning down, who is he going to call, the Mormon fire patrol?”

Sheppard opined, “Imagine for a moment a conservative commentator making such a remark about President Obama or any leading Democrat,” while The Blaze‘s Jonathon Seidl similarly wondered “do we really need to ask what the outrage would be if the tables were turned?”

Since Joy Behar isn’t exactly beloved among right-wingers (and is probably delighted at the outrage), it seems she isn’t entitled to a reasonable person’s interpretation of her remark, which was clearly meant to raise a hypothetical in response to Romney’s call for fewer firemen, as in “I’d like to see what would happen if Mitt Romney’s house caught fire. Who’s he going to call since he doesn’t want more firemen? The Mormon fire patrol?”

But, hey, fair enough, I’m sure both sides engage in unkind interpretations of their foes’ words, and Joy isn’t some helpless babe in the woods. But what this mini-brouhaha really illustrates is the right wing’s screwed up sense of priorities. They’re at once outraged by what they all recognize as a joke (perhaps a liberal was around to explain it), and they’re outraged by the lack of outrage, and they’re outraged at the hypothetical outrage that would occur if a conservative made the same joke.

Not one of them, however, is outraged that Mitt Romney opposes hiring back any of the 700,000 cops, firemen, teachers, and other public servants who have been sacrificed to protect Romney’s own 13-14% tax rate, or the real houses that could burn down as a result. I’d like to see their houses catch fire, what are they going to do, smother it with a Joy Behar joke?

Here’s a shorter clip of what Joy actually said: