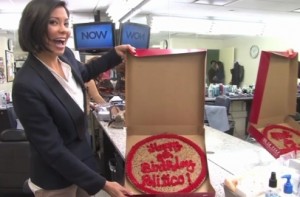 They grow up so fast, don’t they? Online political media giant Politico turns five years old today, and to celebrate, the site posted a video roast by some quotable notables in the political media world. While the site has arguably earned the right to toot its own horn at least once every half-decade, did they really have to overshadow the birthday of Saved By The Bell actress Tiffani-Amber Thiessen?

January 23 is also the birthday of Captain Chesley “Sully” Sullenberger, who, it should be noted, only won that one morning, and perhaps most fittingly, late Battleship Potemkin director Sergei Eisenstein. Most DC media types will tell you that they’ve never met a Politico reporter who wouldn’t push a baby down the stairs to get a story.

Politico is “truly a news organization that acts its age: a petulant five-year-old concerned with only trivial matters,” host of “MTP” David Gregory says with a smile.

With a few repeats and some intensive listening, Arianna Huffington can be understood as saying, “Just as I was sitting down to write this, I saw that Mike Allen had already broken what I was going to say.”

MSNBC’s “Morning Joe” host Willie Geist remarks, “I’ve gotta recuse myself because I don’t care for Politico, inside the Beltway gossipy garbage. And CBS “Face the Nation” host Bob Schieffer cracks, “The next thing you know, you’ll be getting your driver’s license.”

I don’t know that I can top any of them, but I will add this: Why did the Politico reporter cross the road? I don’t know, but give it 5 minutes, and FishbowlDC will have a plog post about it. Probably without a photo.

Even though we don’t go for this kind of self-promotion, the video is fun, and Politico has earned every second of it. Happy Birthday, Politico.