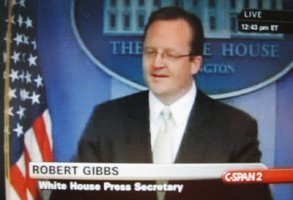 At today’s White House Press Briefing, things got a little tense between Press Secretary Robert Gibbs and CBS News’ Chip Reid, as Reid questioned Gibbs about a Washington Times report that accuses the White House of selling access to the White House bowling alley, among other things. The exchange ended with Gibbs talking about chicken fingers, and Reid referencing the Clinton “Lincoln Bedroom” scandal.

Following up on a question by CNN’s Ed Henry, Reid asked if the administration would “release the names of donors who have gotten special access to White House advisors and perks like the bowling alley,” a classic “When did you stop beating your wife?” gambit.

Gibbs pointed out that the White House would be releasing the names of everyone who visited the White House, with whom they met, and for what time period. It would be left to reporters to cross-reference the names with FEC donor lists.

When Reid pressed the point about the bowling alley, Gibbs shot back “I can report to you that Ethan Gibbs, with the bumpers down, bowled a couple of games while eating some chicken fingers.” (Gibbs didn’t mention whether the President had ever bowled there with the bumpers down.)

The meat of the Washington Times’ story appears to be a pair of DNC memos (here and here) that describe National Finance Committee membership, and a couple of anecdotes about donors having visited the White House movie theater and bowling alley. As Gibbs points out, many of the President’s friends also happen to be donors, and the Times story includes a White House statement that Gibbs reiterated today: “Contributing does not guarantee a ticket to the White House, nor does it prohibit the contributor from visiting.”

The influence of money in politics has long been fodder for outrage, real or manufactured. The Bush administration faced similar accusations more than once. The fact that there’s a loud call for investigation from the RNC, then, should come as no surprise.

How the rest of the media treats it is another question. Gibbs countered the RNC’s accusations by noting that this administration will be the first to publish a list of every single visitor to the White House, and that the DNC doesn’t take contributions from registered federal lobbyists or political action committees. Let’s see if that gets reported alongside the bowling alley innuendos.