Roger Ailes In New Biography: Newt Gingrich Is ‘A Prick’ And Biden Is ‘Dumb As An Ashtray’

Roger Ailes In New Biography: Newt Gingrich Is ‘A Prick’ And Biden Is ‘Dumb As An Ashtray’ 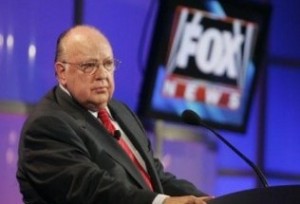 Two biographies on Fox News head Roger Ailes are set to drop this year — one by New York’s Gabriel Sherman and one by Zev Chafets. The latter received “unprecedented access” to Ailes, and an excerpt from the book made its way into Vanity Fair on Wednesday. In it, the controversial Ailes offered thoughts on everyone from President Obama to Newt Gingrich.

Chafets wrote about the time he spent with Ailes — “whether he is relating how he told NBC not to name its cable channel MSNBC (‘M.S. is a damn disease’) or, in an appearance before a student audience, trying to recall the name of a CNN anchor ‘named after a prison.’ (Soledad O’Brien.)”

And there were more strong opinions where that came from. Back during the 2012 Republican primaries, for example, Gingrich, amid his poor performance, complained about Fox News support for Mitt Romney. “He’s a sore loser and if he had won he would have been a sore winner,” Ailes said. “Newt’s a prick.”

Also during the election, there was the controversy over Hilary Rosen‘s remark about Ann Romney not having worked a day in her life. Ailes had an answer for that too, flipping the criticism to hit Obama’s background:

“Obama’s the one who never worked a day in his life. He never earned a penny that wasn’t public money. How many fund-raisers does he attend every week? How often does he play basketball and golf? I wish I had that kind of time. He’s lazy, but the media won’t report that.” He noticed my arched eyebrows and added, “I didn’t come up with that. Obama said that, to Barbara Walters.” (What Obama said was that he feels a laziness in himself that he attributes to his laid-back upbringing in Hawaii.)

Chafets’ excerpt also informed that Ailes is a fan of Sen. Marco Rubio (R-FL) — who is talked about as a potential 2016 candidate — but not so much in the role of vice president. Speaking of which: Ailes further added that he has a “soft spot” for Biden, “he’s dumb as an ashtray.”

Delving into more election matters, Chafets shared an anecdote Ailes relayed about a sit-down with Obama.

After some pleasantries, Obama got to the point. He was concerned about the way he was being portrayed on Fox, and his real issue wasn’t the news; it was Sean Hannity, who had been battering him every night at nine (and on his radio show, which Fox doesn’t own or control). Ailes didn’t deny that Hannity was anti-Obama. He simply told the candidate not to worry about it. “Nobody who watches Sean’s going to vote for you anyway,” he said.

About the encounter, Ailes said, “I don’t think he liked the meeting very much.”