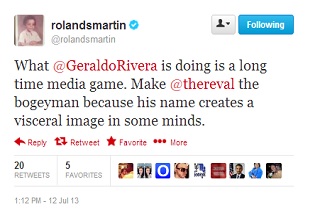 Fox News commentator Geraldo Rivera‘s appearance on Fox and Friends Friday morning has invited a blizzard of tweets from TV One host and former CNN contributor Roland Martin, who accused Rivera of ignoring the grassroots support for Trayvon Martin, in favor of playing the “media game” of turning leaders like Rev. Al Sharpton and Rev. Jesse Jackson into “racial bogeymen.”

Geraldo became an early flashpoint in this story when he said, last year, that Trayvon Martin’s hoodie was as responsible for the teen’s death as anything else. He later apologized for the remark, but in today’s Fox appearance, Rivera said that the “ladies of the jury… if they were armed, they would have shot and killed Trayvon Martin a lot sooner than George Zimmerman did.”

Just a clip on @mediaite where @GeraldoRivera is saying the #TrayvonMartin case was brought to trial because of @TheRevAl. YOU ARE WRONG, G.

To be honest @geraldorivera, the outcry in social media started BEFORE @thereval got involved. He was following the will of the people.

Folks like @geraldorivera always want to play @thereval @RevJJackson game, as if “the people” don’t think for themselves. You’re dead wrong.

Hey @geraldorivera, do some reporting. @jamalhbryant went down to Orlando before @TheRevAl did to meet with pastors.I remember it all.

Hey @geraldorivera, did @thereval organize all of those hoodie up rallies, candlelight vigils & marches across America? Nope. So stop it.

See @geraldorivera, Pres Obama didn’t speak on #TrayvonMartin because of @thereval. It was the COLLECTIVE voices of thousands that made him.

This is not about diminishing @thereval or me claiming credit, @geraldorivera. But denying the voices of the people is factually incorrect.

See, @geraldorivera, social media made ME aware of this story, not @thereval. That’s how I got involved. Ask @attorneycrump.

I do your radio show all of the time @geraldorivera. What you stated on Fox News was 100% incorrect. You need to set the record straight.

What @GeraldoRivera is doing is a long time media game. Make @thereval the bogeyman because his name creates a visceral image in some minds.

See, 20-30 years ago, @geraldorivera and others wouldn’t say @thereval. They would say @RevJJackson. It’s as if no one else can think/react

The analysis of @geraldorivera on this is too simplistic. This was a movement by the people. I was in the middle of it. Not on the sideline.

So @GeraldoRivera, I’m scheduled to do your radio show next week. I’ll be happy to chop it up w/you on how THE PEOPLE drove the Trayvon case

This reminds me of the Don Imus stuff. Media said @TheRevAl @RevJJackson drove that. Truth: @NABJ was the force behind that. They followed.

I’ve seen folks in the media make @TheRevAl and @RevJJackson the racial bogeyman in cases they didn’t even know about! #Truth

When you can make @TheRevAl @RevJJackson the focal point, peoples negative view of them takes over, NOT the facts of the real story. #Truth

Sorry @geraldorivera, I know the #TrayvonMartin case INSIDE AND OUT. Was in the thick of it. You’re dead wrong on this one, son!

You can have your opinion @geraldorivera. Just base it on facts. In this one, you’re wrong, & I can’t be silent about a lie.

While the actual catalyst for the prosecution is arguably a matter of opinion (I would argue it was George Zimmerman’s gun), Martin is correct that the shooting of Trayvon Martin caused a bottom-up groundswell of outrage that the killer was not arrested, and one fact that’s lost on many is that the national media ignored the story for weeks. President Obama didn’t comment about the case when Rev. Al got involved, but weeks later, when an NBC News reporter asked him about it. Among mainstream media outlets, Geraldo’s Fox News was late to the story, but in step with a conservative media that immediately saw the case as Geraldo does. This would explain why Geraldo could be so unaware of what happened prior to March 19, the first time Fox News covered the story, and a week after other outlets had begun to.