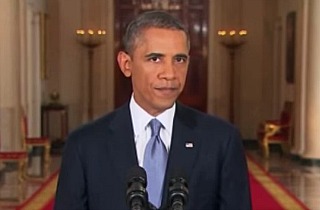 In the late summer of 2013, a series of videos began to surface on the internet which showed the bloody Syrian civil war had taken a turn toward the unspeakable. The videos revealed images of young men foaming at the mouth; the bodies of children, contorted and discolored; the floors of makeshift hospitals covered with bodies of civilians that died of an apparent chemical weapons attack.

In the days that followed, American officials and independent observers confirmed that Syrian President Bashar al-Assad had committed a flagrant violation of international norms and used Sarin gas against civilian targets. The White House prepared to respond to this precedent-setting violation of decency with force.

But the American public, war-weary and more concerned about the state of America’s domestic affairs than those of the international community, required convincing that a military exercise in Syria was both justified and could be effective at accomplishing its stated mission.

“We will be able to hold Bashar al-Assad accountable in a very limited, very targeted, very short-term effort that degrades his capacity to deliver chemical weapons. That is exactly what we are talking about doing,” Secretary of State John Kerry asserted meekly in a self-defeating effort to amass European support for a strike on Assad. “Unbelievably small, limited kind of effort.”

So small, in fact, you’d never even know it happened. Faced with this obvious logical contradiction, even those in the United States who supported a strike began to wonder whether the goal of ousting Assad, or even curtailing the future use of weapons of mass destruction, could be achieved. Given the Lilliputian footprint such a strike would leave, opponents wondered if it was worth the risk.

Faced with criticism from nervous Democratic allies, the White House was pressured to put a vote for a strike before Congress — a vote that was sure to fail. The day after an off-the-record meeting with the New York Times editorial board on August 29, 2013, a Times editorial took the president to task for adopting an “approach on Syria now seems wholly at odds with the strong position” on the Iraq War. They observed that, based on Obama’s own pronouncements during the 2008 campaign, “the president does not have power under the Constitution to unilaterally authorize a military attack in a situation that does not involve stopping an actual or imminent threat to the nation.”

It was then that reports indicated Obama would ignore his advisors and seek congressional approval for a strike on Syria while still reserving the authority to execute a strike on Syria regardless of the result of that vote.

The White House reserved prime time on the networks to address the country and build support for such a strike. Just a day before Obama was scheduled to deliver that address, what Kerry called a “breakthrough” was delivered to the president in the form of a Russian offer to broker a deal in which their client in Damascus would surrender his chemical weapons to international inspectors.

Obama embraced the deal, but he nevertheless took the opportunity to speak to the nation and detail his rationale for a strike which he had already decided against.

“If we fail to act, the Assad regime will see no reason to stop using chemical weapons,” Obama told the public. “As the ban against these weapons erodes, other tyrants will have no reason to think twice about acquiring poison gas, and using them. Over time, our troops would again face the prospect of chemical warfare on the battlefield. And it could be easier for terrorist organizations to obtain these weapons, and to use them to attack civilians.”

“If fighting spills beyond Syria’s borders, these weapons could threaten allies like Turkey, Jordan, and Israel,” Obama continued. “This is not a world we should accept. This is what’s at stake.”

Today, less than 8 months later, the consequences of the president’s inaction and indecisiveness are clear. All of the consequences that the president predicted would occur in the absence of a strong response from the West to the battlefield use of chemical weapons have largely come to pass.

On Monday, the United States government confirmed that the Syrian government was behind an April 11 chlorine gas attack on Syrian civilians. Though chlorine was not among the weapons which Assad agreed to destroy, the use of a classic World War I era poison gas on civilians shows a distinct lack of concern for the consequences of this violation of the spirit of the 2013 agreement. Damascus has also missed a series of hard deadlines to dispose of those weapons they did consent to giving up.

Moreover, as the president warned, violence has spilled over Syria’s borders into Lebanon, Jordan, and Turkey. Finally, Russia — the peacemaker and Obama’s political savior in this arrangement — was so emboldened by the West’s lack of action that they used a period of instability in a sovereign neighbor to invade it and annex their territory. Count that as one of the consequences of inaction that Obama and his advisors did not foresee.

American troops in battlefields across the globe — from Asia, to Africa, to Latin America — have yet to face the specter of chemical gas attacks, but the president was lamentably prescient about every other consequence associated with American inaction. The fear is that he will eventually be correct about that prediction as well.

As Obama predicted in 2013, American inaction has made the world a more dangerous place and atrocities continue to be committed. Obama has probably never been more frustrated at being proven right.