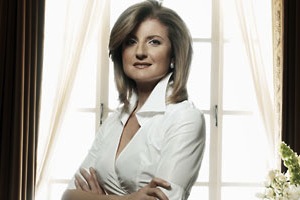 Yesterday, New York Times executive editor Bill Keller wrote a biting op-ed piece on the impact aggregation has on online reporting, singling out Huffington Post founder Arianna Huffington as an example of an online publisher who, according to Keller, borrowed news from other sources the way a Somalian pirate might bother other ships’ cargo.

Well, Huffington decided to respond to Keller’s claims yesterday evening, calling his piece an “exceptionally misinformed attack.” Huffington echoed the snarky tone of Keller’s article in her response, and even managed to get in a dig at News Corp. head Rupert Murdoch in the process. Now that’s multi-tasking:

After opening his piece by patting himself on the back so hard I’d be surprised if he didn’t crack a rib (it seems everyone — even Woody Allen and those folks on Twitter — thinks he’s super “powerful” and “influential”!), Keller turned to the putative subject of his column: “the ‘American Idol’-ization of news” and the evils of “aggregation.” Hearkening back to the glory years when Rupert Murdoch and his minions labeled sites that aggregate the news “parasites,” “content kleptomaniacs,” “vampires,” and “tech tapeworms in the intestines of the Internet” (the news industry equivalent of “your mama wears army boots!” although, not quite as persuasive), Keller says of aggregation: “In Somalia this would be called piracy. In the mediasphere, it is a respected business model.”

The response, as most responses to personal digs end up doing, sets the tone for a “he said, she said” squabble rather than an important discussion on the ethics of online reporting in a changing media climate, which both these pieces could have had the opportunity to be.

The trouble with this (or the benefit of this, depending on how you look at it) is, of course, the same we expressed in our look at Keller’s original article: Both entries’ “churlish” tone is part of what makes them so gosh darn sharable across the internet. Of course every media writer is going to sink his teeth into a feud between Keller and Huffington (Print vs. Web! Old vs. New! Lib vs… Lib!), but the personal digs and smattering of jokes make these of interest to those beyond the small media bubble wherein everyone is constantly writing about what his neighbor is writing about his neighbor.

In short, Keller’s decision to tout his inclusion on various “most influential” lists and to call Huffington and Aol’s new reporting staff something akin to “hiring a top chef to fancy up the menu at Hooters” makes his argument – and the man himself – seem petty, or vindictive, or possibly like a “jellus h8er.” And Huffington’s choice to flaunt HuffPost’s huge numbers as a testament to the site’s quality, or closing her piece with “Ok, back to the merger,” ends up bringing both bold names down to the same level. It is a shame? Should we commence the hand-wringing and reminisce about the “good ol’ days” of journalism? Sure, maybe, as long as that hand-wringing comes with a slideshow.

Ok. Back to watching kitten videos.