Rula Jebreal: Suppression of Palestinian Voices Is a ‘Media Scandal’ 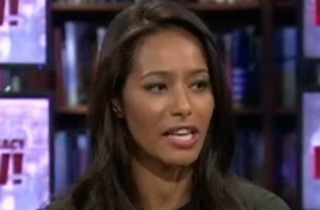 Rula Jebreal, the former MSNBC contributor who got some attention this week for criticizing MSNBC’s own coverage of the Gaza conflict on MSNBC, appeared on Democracy Now! today. And aside from addressing questions about her current status at the network, Jebreal went off on what she believes to be an American media suppression of Palestinian voices that amounts to a serious scandal.

Jebreal (who took a brief shot at MSNBC over its Bridgegate coverage) said that the media’s overwhelmingly pro-Israel coverage influences public opinion and public policy about the region. She said she was used to getting in trouble with more corrupt media in nations like Italy and Egypt, but she was shocked that the “liberal media” which professes to cover issues in an unbiased way would show a clear and overt bias.

“I never experienced anything like this. I mean, I understood doing what I did in Egypt would lead me to be kicked out of the country. I understood in Italy, where Berlusconi controlled most of the media… I hope that MSNBC and other networks will actually revise their policies and will have more voices. It doesn’t have to be me. It’s not about me. We have a media scandal that we need to expose.”

Jebreal returned to MSNBC last night for a heated discussion with Chris Hayes over this very subject, noticeably being identified as a “Palestinian journalist” as opposed to an MSNBC contributor.

Watch part of her appearance here, via Democracy Now!: