Rupert Murdoch Wants Everyone to Pay For What He Is Selling

Rupert Murdoch Wants Everyone to Pay For What He Is Selling 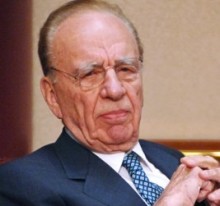 Rupert Murdoch is not scared to take your money! While the New York Times willy-nillies around the paid content debate — will they charge? how will they charge? maybe they’ll only charge for parts — Rupe, whose WSJ has been behind a paid firewall since the start, is going to charge for everything! This from the Financial Times

Rupert Murdoch has vowed to charge for all the online content of his newspapers and television news channels, going well beyond his prediction in May that the company would test pay models on one of its stronger papers within the year….”We intend to charge for all our news websites,” Mr Murdoch said. “If we’re successful, we’ll be followed by all media,” he added, predicting “significant revenues” from charging for differentiated news online.

This announcement, which was the top headline on Drudge overnight, follows reports yesterday that News Corps’ “fourth-quarter operating income…plunged more than 30 percent” mostly due to MySpace.

The obvious question remains: will people pay? The Wall Street Journal has managed to maintain a somewhat successful firewall mostly due to the fact that at the end of the day it is a niche publication, which the business world deems necessary. As much as we love it, the same cannot really be said for the New York Post, whose website, mind you, is a nightmare to navigate.

Time will tell if it’s a smart move; don’t ever count Rupe’s media savvy out. Moreover perhaps by the time this all this comes about we will have made the larger paid content leap and it won’t seem like such a stretch. That said, consumers these days are a savvy bunch and won’t just pay for anything. Good content is key in this brave new media world (another reason the WSJ has been able to continue charging) and Murdoch’s others papers — New York Post, News of the World, etc. — have traditionally trucked in tabloid scandal and splashy headlines, neither of which are hard to find elsewhere on the Internets, free of charge.