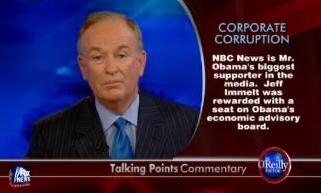 The Monday after the ‘truce’ news, it was MSNBC’s Keith Olbermann going after Bill O’Reilly and Fox. On Tuesday, Olbermann turned his attention to CNN’s Lou Dobbs.

When O’Reilly finally weighed in last night, with a stinging attack on MSNBC parent company GE, and its CEO Jeffrey Immelt, over multiple grievances, it signaled a further dissolution to whatever shards of a deal was left between the two networks. Olbermann was on the Dobbs track again last night, while O’Reilly hammered his boss’ boss – and now all attention shifts back to the MSNBC host (both clips after the jump.)

O’Reilly’s “Talking Points” attack on GE stemmed from the $50 million fraud settlement with the SEC this week. But it also dove-tailed with NBC News’ ‘promotion’ of Barack Obama during this election cycle – and Immelt’s work with Obama now.

A major American corporation promoting the election of Barack Obama and then seeking to profit from his policies? I mean, it’s very simple. The Security and Exchange Commissions says GE is guilty of fraud, so how can its CEO Jeffrey Immelt be advising President Obama? That’s insane.

The two-pronged attack in many ways reiterated some attacks of O’Reilly in the past over Immelt and GE. But in the context of this supposed new cable news world, where some level of a ceasefire is supposedly in place, it reaffirms to his fans he is not under corporate control. O’Reilly could conceivably never mention GE or Immelt again, and still be in the clear. He only occasionally touches on the topic anyway – and he proved his ‘independence’ last night, even if some level of ‘truce’ still stands and this was a response to Olbermann’s attacks on Monday.

For the MSNBC host, this problem does not go away nearly as easily. On one level, there is his obsessive comments on the topic, on Daily Kos, on-air and to reporters. The Huffington Post, which has traditionally been a safe-haven for Olbermann supporters, put out a very critical piece yesterday on the ‘truce,’ saying Olbermann was “playing viewers for fools.” Writes Jason Linkins (who was blasted in the comments section):

This reality is borne out by Olbermann’s perplexing reaction to the controversy, which has been to blow hot snot all over New York Times reporter Brian Stelter’s reporting, while simultaneously “honoring” and praising the accuracy of Salon blogger Glenn Greenwald’s response, which was based entirely on Stelter’s reporting.

This hypocrisy is just the beginning. Although FNC’s Gretchen Carlson was on the “Worst Persons” list last night, and Olbermann took a couple recycled jabs at Murdoch and FNC, the big cable news foe turned into Dobbs again. Dobbs is certainly relishing his new fight – he continues Olbermann attacks on the radio. But for Olbermann, he’s now swinging at someone who he has already said on air gets half the ratings of Countdown. What benefit does shifting the target from O’Reilly to Dobbs get the MSNBC host, besides an easier nights sleep for his bosses?

This is turning into a lose-lose situation for Olbermann. If he goes back to his Monday attack line-up of O’Reilly and the rest of Fox, the ‘deal’ is shot and his bosses’ are unhappy (and O’Reilly will likely be back on the GE attack). If he largely ignores O’Reilly, his viewers will speak out. We’re three days in, and this story continues to evolve. But for Olbermann, the story is spinning in the wrong direction.

Here are the clips from last night: