Rush Limbaugh: Harry Reid Is The Lucifer To The President’s ‘Imam Obamadinejad’ 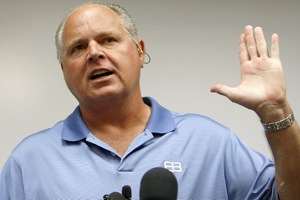 There comes a point when listening to Rush Limbaugh that one wonders how people like Jon Stewart stay in the business of satire when it’s impossible to parody the real thing This one takes a little bit of work to keep up with, but it ends with “fallen angel” Harry Reid squaring off with “Imam Obamadinejad,” so the topic seems to be fairly plausible Election Day predictions.

The event that set Limbaugh off this time is the fact that Senate Majority Leader Harry Reid claimed that, “but for me, we would be in a world-wide depression. “But that’s Obama’s line!” Limbaugh protested on his show, citing his supreme confusion and distress at the fact that Sen. Reid would try to take credit that Limbaugh felt was wrongfully Obama’s. It was a clear overreach of his position in the Democratic Party as Limbaugh understood it. In fact, Limbaugh was certain the quote was President Obama’s, something he said “while meeting with Steve Jobs” (?), but, instead, Limbaugh got the “second biggest disappointment in my life.”

But then Limbaugh started thinking about the President’s reaction to the quote and was suddenly less distressed. He bets President Obama “chewed him out good,” since “it was the president– the president only— who plugged the hole, who lowered the seas, who healed the planet, who cured the sick, who saved the planet from depression.” Then he continues to explain that “it’s almost like the fallen angel challenging the Messiah, Imam Obamadinejad.”

Considering everything else he calls President Obama– “nation’s first anti-American president” or “jackass,” for example, calling him the Messiah a week after calling him “demonic” isn’t so bad.

The clip from Limbaugh’s radio show below: