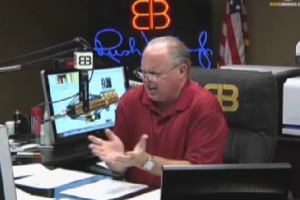 RELATED: Newt Gingrich Suggests He Did Poorly In Florida Debates Because He Was ‘Amazed’ By Romney’s Lies

“Newt said that he was off his game in the last debate last Thursday ’cause Romney was telling such outrageous lies about him that he was shell-shocked,” Limbaugh continued. “Now, I don’t know if that is a ploy for sympathy or what, but what in the world do either of these two guys think is gonna happen when either one of them ends up facing Obama? I don’t care who’s telling lies in the Republican campaign, they are pikers compared to what’s gonna happen when the Democrat campaign begins.”

Limbaugh added that once the general election begins, Romney will pull his punches when campaigning against President Obama. “Have you seen any evidence of any Republican going after Obama the way Republicans are going after each other? You haven’t. In fact, when Romney’s had the chance — “Oh, gosh, you know, I just think he’s in over his head.” Has he said something as innocuous as that about Newt?”

Listen to Limbaugh below: