Rush Limbaugh: “Ron Paul Has Nothing To Do With The Tea Party”
audio

Rush Limbaugh: “Ron Paul Has Nothing To Do With The Tea Party” 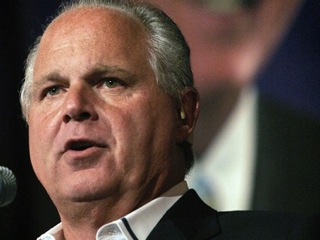 Apparently Limbaugh slept through the entire 2007 Republican primary campaign. Reacting to a self-identified tea party caller that suggested Rep. Ron Paul, Rep. Michele Bachmann, and former Senator Rick Santorum were the only true conservatives left in the race, Limbaugh reacted in shock at the idea that Rep. Paul would be associated with the Tea Party because “he has nothing in common with Tea Party foreign policy.” Except the first group to use the term “Tea Party,” as is well documented, were Rep. Paul supporters.

The caller that so infuriated Limbaugh called to argue that “Newt Gingrich is the RINO’s RINO” for his “well-known progressive” stances, and that he was leaning towards a vote for Rep. Paul, who to him represented “trust, justice, and constitutional leadership.” This left Limbaugh upset. “This guy is not a Tea Party caller; this guy is a Ron Paul caller,” he told his audience. He then went to argue explicitly: “the Tea Party is not the Ron Paul campaign. Ron Paul has nothing to do with the Tea Party– zilch, zero, nada.” This, he asserted, was because of his foreign policy. “Ron Paul blames America for 9/11,” he continued, “that’s not what the Tea Party thinks!” He also argued that Paul did not “start the Tea Party,” a fairly well-documented fact.

While it is true that many in the 2011 version of the Tea Party– a much larger group than the Tea Party in its nascent stages– has foreign policy stances in some form, many stances of these hawkish, and that Rep. Ron Paul’s supporters have drifted away from the social conservatives now prevalent in the Tea Party movement, the claim that Rep. Paul was not there at the inception of the group or that he has “nothing to do” with it is wildly out of step with history that should be recent enough to recall correctly. The “Tea Party” name came from the fact that Rep. Paul supporters began staging events at the anniversary of the Boston Tea Party to fundraise– an idea that also spread to holidays like Guy Fawkes’ Day that year.

Plenty of reporting from 2007 shows that the “Tea Party” in its most primitive form was a way for Paul supporters to gather. While, yes, there was a period in between the 2008 primaries and the 2009 Tea Party conservative explosion that reignited the Tea Party in its current manifestation, to ignore the relationship that one has with the other, and the role Rep. Paul played in its first incarnation is to ignore history so recent it lives on the internet as it mostly did four years ago.

RELATED: Rep. Ron Paul Reacts To Trump’s Debate Invite: ‘Beneath The Office Of The Presidency’

It also ignores the core of the Tea Party movement: a sense that the government is too big, and it spends too much money, and that putting aside other differences Americans may have in politics is essential to getting together to solve the current debt crisis. The 2009 Tea Party protests, and the Glenn Beck-hosted 9/12 events correlated with it, were about one problem and one problem only: government spending. Foreign policy was a matter to be left on the backburner as it pertained to everything but the debt crisis and government spending. The urgency of the situation didn’t allow for drawing lines the way Limbaugh does here. Of course, by the time he had chosen to exclude Rep. Paul from the Tea Party, the caller who was co-excommunicated with the Congressman had long hung up. But one can imagine the Rep. Paul Tea Party faction won’t be too happy to hear his comments from today.

Listen to Limbaugh’s comments in the following clips below: