Rush Limbaugh: The Democratic Party ‘Launched A War On Motherhood’ 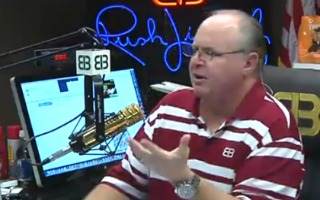 Conservative radio host Rush Limbaugh today weighed in on the controversy surrounding remarks made by Democratic strategist Hilary Rosen who said on CNN on Wednesday that former Massachusetts Gov. Mitt Romney’s wife Ann Romney had “never worked a day in her life.” Limbaugh pounced on the remark and said that the Democratic party was waging a “war on motherhood.”

“Now we find out that there is genuine hostility for women who do not work. Who only stay at home and raise their families,” said Limbaugh. “So the Obama administration has just effectively – whether they know it or not – launched a war on motherhood via Hilary Rosen on CNN last night.”

“This is who these people are,” said Limbaugh. “They are not nice. They have no manners. In the basics of human existence – they are reprobates. They don’t understand politeness.”

Listen to the segment below via Daily Rushbo: