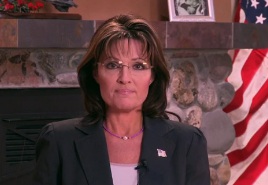 Tuesday night, I wondered if Sarah Palin would respond to mounting criticism over her “crosshair map” by retreating, or reloading. Early this morning, that question was answered, as Palin posted a video response that took on the criticism.

While there is widespread outrage over Palin’s misappropriation of the term “blood libel,” very little attention is being paid to the fact that her response is fixed around the lie that criticism of Palin has centered around the use of common electoral “targeting” metaphors, rather than the specific use of crosshairs, a lie that was called out last March by Gabrielle Giffords herself.

The quote that’s getting the lion’s share of attention is Palin’s assertion that “journalists and pundits should not manufacture a blood libel,” a term that has very specific historical connotations. Even conservative pundit Jonah Goldberg of National Review Online had trouble stomaching this:

I should have said this a few days ago, when my friend Glenn Reynolds introduced the term to this debate. But I think that the use of this particular term in this context isn’t ideal. Historically, the term is almost invariably used to describe anti-Semitic myths about how Jews use blood — usually from children — in their rituals. I agree entirely with Glenn’s, and now Palin’s, larger point. But I’m not sure either of them intended to redefine the phrase, or that they should have.

Making the term even less ideal is the fact that several of the victims of Saturday’s shooting, including Rep. Gabrielle Giffords, were Jewish. In fact, Giffords was the first Jewish person to be elected to the House of Representatives from Arizona. There has been some speculation that Palin might not have known the origin of the phrase, and may have simply gleaned it from a Glenn Reynolds op-ed earlier this week.

Game Change co-author Mark Halperin also criticized Palin for making her response “a little too focused on her,” a somewhat empty point when you consider the amount of attention that this story has focused on Palin.

I’ve also heard some suggestion that Palin chose to release her response when she did as a way to upstage President Obama‘s speech tonight, at a memorial for the victims of the shooting. Of course, this cuts both ways, as Palin’s critics have also lambasted her for waiting so long to respond. Having waited this long, however, it’s fair to point out that this could have waited a day longer.

To the extent that she did take on her critics, she did so dishonestly, claiming that criticism was centered around “maps of swing districts used by both sides of the aisle.”

Of course, the difference between Palin’s “crosshair map” and accompanying gun metaphors, and the more common martial terminology that is now being rethought in hindsight, is the very issue upon which criticism of Palin hinges. That difference was already debated last March, when Chuck Todd asked Gabrielle Giffords if Palin was simply using common political nomenclature. Gabrielle Giffords points out the difference, clearly identifying the crosshairs as a step beyond standard electoral “targeting”:

…for example, we’re on Sarah Palin’s “targeted list,” but the thing is, the way she has it depicted has the crosshairs of a gun sight over our district, and when people do that, they’ve got to realize there’s consequences to that action.

Now, if Palin wanted to defend that action, she could have done so, but she chose to ignore the distinction that her critics, including Gabrielle Giffords, have clearly drawn.

Compounding the insult of ignoring the substance of Rep. Giffords’ criticism was the fact that, in her response, Palin took it upon herself to play mind-reader to the stricken Congresswoman:

Just days before she was shot, Congresswoman Giffords read the First Amendment on the floor of the House. It was a beautiful moment and more than simply “symbolic,” as some claim, to have the Constitution read by our Congress. I am confident she knew that reading our sacred charter of liberty was more than just “symbolic.”

These flaws undercut whatever legitimate points Palin makes during the balance of her statement, among them the rush to judgment by people on both sides of the political divide, and the attempts by a few to blame her for the shooting.