Amid a growing backlash spurred by yesterday’s mass shooting, SarahPAC official Rebecca Mansour appeared on The Tammy Bruce Show to push back against suggestions that Palin’s much-derided “crosshair” map is somehow connected to the tragedy. In the process, though, she claimed that the symbols on the graphic were never intended to evoke gunsights, but rather, “surveyors symbols.”

Regardless of the graphic’s relevance to yesterday’s shooting, Mansour’s claim is belied by a November tweet from Palin, which read “Remember months ago “bullseye” icon used 2 target the 20 Obamacare-lovin’ incumbent seats? We won 18 out of 20 (90% success rate;T’aint bad)” (h/t Teresa Kopec & Lucian Dixon)

An aide to Sarah Palin said images of cross-hairs were never meant to evoke violence, in the Palin camp’s first extended comment on yesterday’s attack.

” We have nothing whatsoever to do with this,” Palin aide. Rebecca Mansour told the talk radio host Tammy Bruce in an interview.  “We never ever, ever intended it to be gun sights. It was simply cross-hairs like you’d see on maps,” she said, suggesting that it is a “surveyor’s symbol.”

There is “nothing irresponsible about our graphic,” she said.

She called attempts to link Palin to the violence “obscene” and “appalling,” and said she was “disgusted” with the politicization.

“We can’t ban the words ‘targeted swing districts’ from the English language,” she said. “We did nothing wrong here.”

To be clear, the host of the show, Tammy Bruce, volunteered the “surveyor’s symbol” term, and Mansour concurred.

Mansour is correct to say that the map isn’t to blame for the shooting, and that attempts to score political points even as the tragedy unfolded were reprehensible.

However, the notion that these symbols were “crosshairs, like you’d see on a map” is ridiculous on it’s face. There may be a map somewhere that uses crosshairs in lieu of flags, pushpins, or even bullseyes, but Palin’s is the only one I’ve ever seen. Further complicating the claim, though, is Palin’s own acknowledgement of the imagery in that tweet. 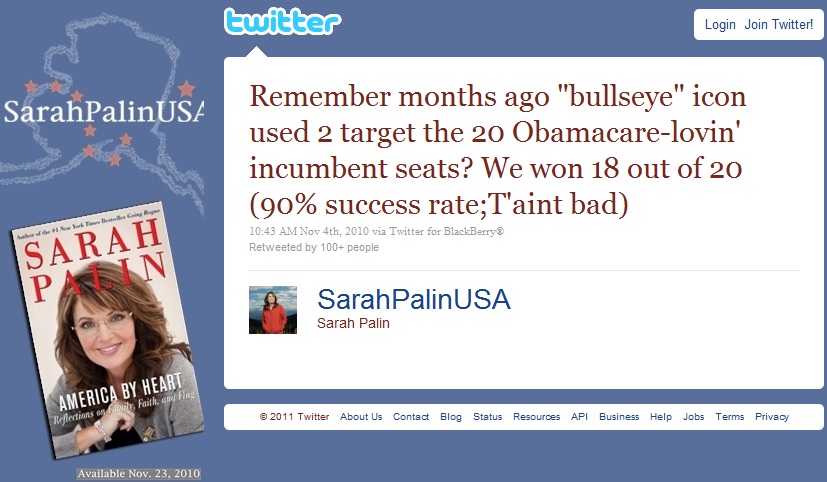 Even if bloggers on the left had not pushed the blame on Palin in the early hours of this story, the media was bound to have this conversation anyway, by virtue of Gabrielle Giffords’ own indictment of the map on MSNBC in March.

As Laura Martin points out, though, Palin offered her own eerily prescient argument in March. In a Facebook post, she illustrated the degree to which violent imagery pervades popular speech with a rant about the NCAA’s Final Four.  The merits of her argument are debatable, but it’s certainly more honest than Mansour’s “surveyor’s symbol” explanation.

I happen to agree with Palin’s overall point, that you can’t simply police speech using a “violence=bad” equation. Where we part ways, though, is in whether her map crossed the line into irresponsibility. The use of “targeting” terminology is commonplace in political talk, as Chuck Todd pointed out to Giffords in March, and many conservatives also point to the use of bullseyes in Democratic maps to defend Palin. While this tragedy has people reevaluating their use, Palin’s “crosshair” map is a degree or two worse.

A bullseye is commonly associated with target practice, and as such, the bullseye itself is the inert, nonliving target. Crosshairs, on the other hand, represent the mechanism by which a target is acquired and killed. It is also an image that resonates in popular culture through countless repetitions, in films and television shows, of the assassin’s POV shot. That the intent was to evoke something like a bullseye (only way tougher), and not the spectre of assassination, is an obvious, yet moot, point. Once that reasonable objection was raised, the image should have been abandoned. The fact that such a move would have done nothing to sate Palin’s critics, and likely would have amplified the din, might have been a factor in Palin’s decision not to, but it would have been the right thing to do.

That she didn’t, and that this refusal has come back to haunt Palin, doesn’t mean that she’s in any way to blame for yesterday’s tragedy. However, Geraldo Rivera is probably correct when he says that Palin will pay a price for this, politically. The coincidence has amplified a poor decision, and this even poorer attempt at evasion only exacerbates that.

You can listen to Tammy Bruce’s full interview with Rebecca Mansour here.