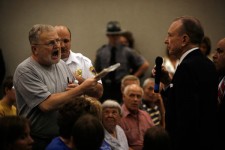 Looks like Senator Arlen Specter learned a little something from that feisty health care town hall he held last week — at least on Twitter, where rants are at least limited to 140 characters.

Specter’s target: Republican Senator Chuck Grassley, who has emerged as a voice promoting the “death panel” myth. Grassley told an audience in Iowa that they had “every right to fear” and that the country “should not have a government-run plan to decide when to pull the plug on grandma.” Specter was having none of it, and told Twitter he called Grassley to make him stop:

Turns out what Specter really meant is that he left a voicemail:

But still! The punch was thrown. And if you know Chuck Grassley on Twitter, you know he’s not one to back away from a fight: 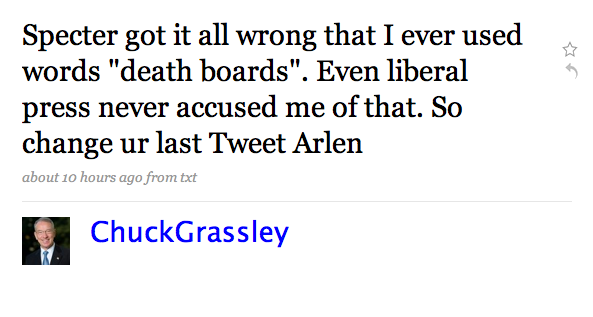 Not even the liberal press! Look who sounds a little bit like Sarah Palin after all. Actually, this is a neat lesson in semantics: Specter’s tweet clearly put “death panels” in quotes, but the focus was the myths, which he did, indeed, spread (“pull the plug on grandma“, anyone?). The phrase “Death Panels” as introduced by Sarah Palin — she keeps on giving! — has been the buzzphrase used to promote the idea. And boy, has it worked.

So what’s wrong with Specter trying to correct the record via Twitter? Nothing, actually, in light of the myths being spread. Alas, Grassley’s offense-as-defense tactic appears to have worked: Specter later toned down his Twittatude and slunk back to the empty promises for political discourse that we’re used to: 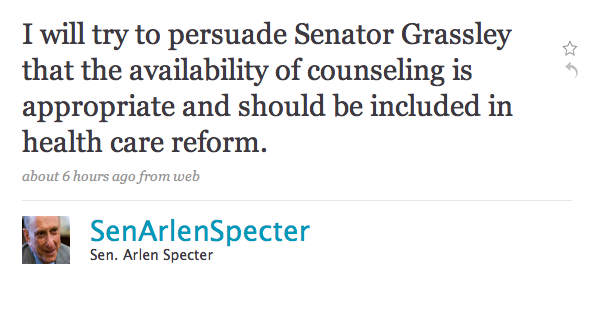 We definitely tip our hat to Specter for having the swagger to call Grassley out on Twitter — very Lance Armstrong of him! — though given it’s limitations, Twitter might not the best place for a productive dialogue on complex subjects. But where is these days.