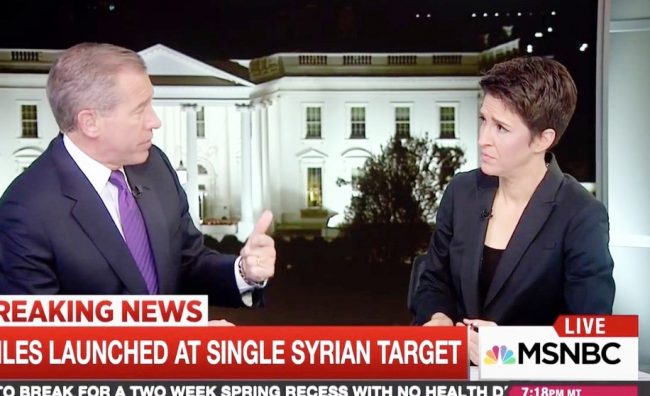 Last night, we showed you the moment Rachel Maddow‘s MSNBC show came to a halt as breaking news poured in that Donald Trump sent a slew of missiles toward an airbase in Syria. He did that in response to a gas attack in the country (and maybe in response to a suggestion from Hillary Clinton).

As they tend to do, MSNBC hauled Brian Williams in for the special report.

Here’s the thing, though: Maddow was already at the anchor’s desk talking about Syria. Why didn’t she get to helm the initial coverage? Many on social media wondered the same.

.@MSNBC why did you bring in Brian Williams to cover breaking news during @maddow air time? Rachel is more than competent. #EverydaySexism

Worse than Brian Williams calling missiles “beautiful” was @MSNBC‘s phallic urge to launch him into @maddow‘s show as soon as bombing began.

Brian Williams, could you ask MSNBC to give Rachel Maddow more air time? ?? Thanks!

.@MSNBC@maddow was on when you had B Williams come in & take over.
SHE has a PhD from Oxford.
He didn’t graduate
She didn’t need rescuing.

Rachel Maddow would never refer to a Tomahawk launch as “beautiful”. What in the ever living hell is Brian Williams doing on her air time?

Brian Williams has lost his mind, waxing spellbound over the “beauty” of the weapons hitting Syria. @maddow is not that vapid, @MSNBC.

Annoyed to hear Brian Williams thanking Rachel Maddow for assisting with coverage – he took over her show!!

Brian Williams is the “traveling White House” of news anchors. #Maddow can handle on her own, thank u. #Syria #MSNBC pic.twitter.com/TeJKiu6J8c

Even @MSNBC thinks Brian Williams, with his sketchiness, is more competent that a woman to handle breaking news-put Maddow on now, please.

The anger ranged from what was seen as sexism at worst and unfairness at best.