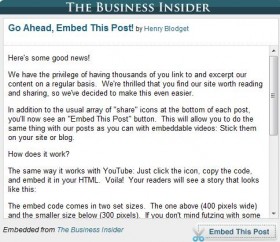 Brilliant idea from Business Insider: Embeddable posts. Henry Blodget posted Thursday about the new feature, which permits bloggers to embed entire posts on their sites, rather than ye olde copy-and-paste. It’s a genius idea, since it incorporates Business Insider branding and makes it easier to include the whole thing than just paste in an excerpt, where attribution may be less apparent. (It’s also an eye-friendly layout; it’s text-only so no photos, and comes in two sizing options.)

It’s a smart move and I wonder if it wasn’t inspired in part by Tumblr, which has a handy “reblog” button that makes it ridiculously easy to copy someone’s post, links and attribution in place, and join that conversation. I have no doubt that far less “reblogs” would take place on that platform were users required to copy and paste in the post (and those pesky links).

Over at Reuters, Felix Salmon is a fan, and points out that he’s been on this idea for a while — since his “Newspapers Should Allow Their Content To Be Embedded” post from, oh, October 2007, off the same suggestion made by Mark Thomas at Economist’s View. Salmon’s reasoning back then has been backed up by the experience of the past two years; we’d embed it if we could, but failing that, here’s the copy-paste:

Increasingly, on the internet, content wants to be distributed. That’s why RSS is successful, and it also helps to explain the success of the Huffington Post, which always includes inks to external news stories on its home page alongside links to internally-created blog entries. Sites like Sploid, which consisted of only external links, failed – but maybe if they could host those stories themselves, rather than linking to other websites, a whole new groundswell of “daily me” sites would be launched, with readers gravitating to their own personal favorites.

What would these past two years of escalating panic have been like had this model been adopted? Ian Shapira would have had no reason to complain about Gawker’s use of his article, since his name and WaPo branding would be literally embedded into its use. The Huffington Post, operating on an extremely efficient system, would no doubt have been thrilled to adopt that mode; they struck a deal with the AP early on to auto-republish their material, and this would be right in that vein. That would have eliminated many of the complaints against them regarding their aggregation. (Having worked there, I can say with certainty that they would have been delighted; it’s a small editorial staff and the news editors would have been thrilled to cut the posting time in half and get more news up.)

That’s what it would have meant: More distribution. As I said of the Tumblr “reblog” button above, it makes sharing content ridiculously easy (that’s why, dear reader, we have lovely little buttons at the bottom of this post inviting you to Twitter, Tumbl, Digg, Facebook etc. etc. etc. this post. Use all of them! All the time!). Sharing is enabled by efficiency, and this system, applied two years ago back when Thomas and Salmon were on it, would have allowed for newspaper content to have been distributed far more widely (rationale for this claim: aggregators and bloggers, especially the ones on a post-count basis, are often hugely pressed for time, and reading and digesting longer articles often falls by the wayside in favor of more quick and dirty items; this would have allowed for the quick “Read This!” post that YouTube and other embeddable vids have enabled). The issue of attribution would not have been an issue, so the “is aggregation stealing?” argument would have had a lot of the teeth taken out of it.

Would it have changed the economics of the situation? Who knows — the dying of newspapers is as much about the lower cost of online content delivery as much as anything else, just as the immediacy of content delivery has undercut the “appointment viewing” element of the nightly news. The niche-ification of news — and thus news sources — has contributed to all of it. So it’s hard to say that embeddable print content would have made a difference (and it’s not like YouTube has figured out how to monetize it all that effectively, either, although that’s their own uncreative fault). But — it would have been progress, and a proactive solution addressing this new technological reality.

Two years later, in the scary non-election-news-late-August dog days of 2009, it’s hard to know what will ultimately survive and why — but innovation and adapting to change is a pretty safe start. Newspapers and magazines would be wise to get on this, immediately. The fight for survival ain’t over yet.