Stephen Colbert Looks Back For The ‘It Gets Better’ Campaign: In Seventh Grade, ‘I Got Called Queer A Lot’ 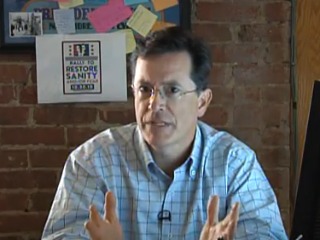 When Stephen Colbert takes a break from being “Stephen Colbert,” he’ll do things like participate in the “It Gets Better” campaign aimed at giving encouragement to LGBT youth facing bullying and discrimination.

In his video message to teens, Colbert draws on his own experiences with being bullied, sharing that, while straight, he has also dealt with homophobic remarks made at his expense:

When I was in seventh grade, I remember being picked on all the time, and I got called “queer” a lot. Just sort of the word that got thrown as a weapon at people when I was a kid and just the most hurtful thing that, I think, the bullies could think of calling you. And, you know, I didn’t like it. And one day I had this revelation because a friend of mine named Pat, who also got picked on by the bullies, was called a “queer” by one of the bullies — a big jock. And Pat, instead of sort of flinching or running away, turned around and said, “Yeah, I am a queer. Kiss me.” And the bully said, “What are you talking about?” And he said, “I’m queer. You called me queer; I am a queer. Kiss me. I’ll prove it.” And the bully didn’t know what to say. And he just turned around and walked away, quietly.

And I was stunned! I couldn’t believe the magic that Pat had just worked. He had somehow figured out that if you don’t give power to the words that people throw at you to hurt you, they don’t hurt you anymore and you actually have power over those people.

Colbert ended his video by assuring kids that it gets better because, as you grow older, “people get nicer.”

Have a look at Colbert’s message: