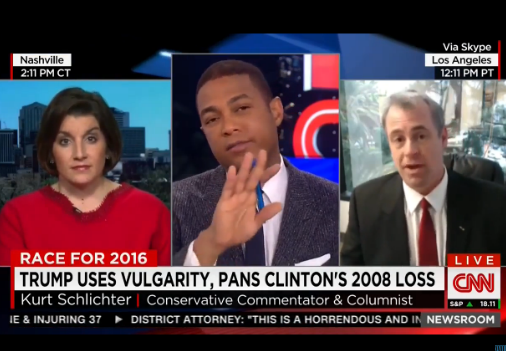 CNN’s Don Lemon abruptly ended an interview with conservative commentator Kurt Schlichter after the conversation veered from Donald Trump‘s recent comments about Hillary Clinton‘s bathroom use to a heated back and forth about President Bill Clinton‘s sexual trysts.

Discussing Trump’s assertion that it’s “too disgusting” to talk about where Clinton disappeared to during Saturday’s Democratic debate, Schlichter insisted he couldn’t care less about the outrage surrounding Trump’s comment.

“Don, it’s gonna take a lot more for me to get upset at a woman who enabled a guy who turned the Oval Office into a frat house and his intern into a humidor,” Schlichter said referring to President Clinton’s affair with Monica Lewinsky. “You know, I just don’t care. I so don’t care. I would need Stephen Hawking to find the theoretical limit of how little I care about Donald Trump’s silly jokes.”

Schlichter went on to say the backlash over Trump’s comments is “hypocritical pearl-clutching nonsense.”

“Because it has nothing to do with what happened,” Lemon replied.

Schlichter continued to rant about Clinton’s connections to a “serial sexual harasser” as the conversation further derailed. Lemon attempted to silence Schlichter calling his tirade “the lowest of the low” and “a cheap shot.”

“Can we cut it off? Can we cut if off please?” Lemon asked his producers, pulling the interview. “Thank you, we’re done.”