The British Print Their Blogs

The British Print Their Blogs 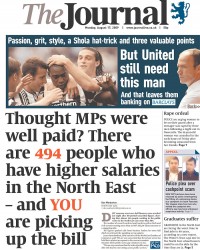 HuffPo’s magazine man James Warren (formerly managing editor and Washington bureau chief of the Chicago Tribune) took a trip across the pond recently and discovered, much to his amazement, that the British know how to have more fun than we do! Or more fun with their newspapers, anyway.

[A]mid the reflexive [American] industry rationalisations, many involving societal change and the coming of the internet, there’s rarely an admission of self-inflicted wounds, including the dreaded Curse of Tedium. Indeed, the country that makes the rest of the world envious of its technological and entertainment creativity, be it Microsoft, Google or Hollywood film studios, needs an emergency boost of British high-energy imagination and flair. We’re drowning in editorial sobriety.

After a few days with the British papers however, which contained “lots of gossip, speculation about possible soccer transactions, and hard-nosed political columns, with Gordon Brown served up as a two-legged, Scottish piñata,” Warren came away feeling “rather informed.” And that wasn’t all.

I came away feeling rather informed – it’s an embarrassment how much more international news there is to be found in British newspapers than in the average US paper – and, I dare say, having had some actual fun. And there is the critical difference.

Newspapers are boring! Americans are too bloody puritan about their news! Actually, Warren’s description of his holiday reading material sounds a lot like the blogosphere, no? Gossip, news, speculation, personality. If our papers were a more fun read — something like the Wall St. Journal meets the New York Post — would they have a better chance at survival? Probably not. Why buy the paper cow when you can get the digital milk for free (for now)? But that’s not to say we wouldn’t like the Times to give it a shot.